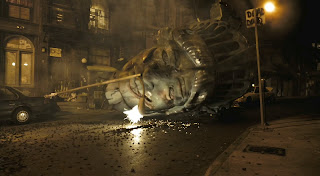 Even though I don't think many people think of them this way, and many of them are more silly then scary, giant monster movies are technically horror movies. They were derived from the 1950s, a time when the Cold War was in full swing. Many Americans had a terrible anxiety that Russia was going to blow us up with nuclear weapons. We all thought what radiation could possibly do, and what it could to everything. The "Godzilla" movies and "Them!" and "Blob" were made in the shadow of the bomb, and we've had a huge fascination with giant monsters ever since.

Sometimes when you over-think it, its humbling. What if there was something bigger than us humans? What if there was a bigger creature, a top to the food chain? What if they accidentally stepped on us the way we accidentally step on ants? Its definitely something to think about, something that I weigh in on with each new giant monster movie. The idea of a giant monster coming out of the sky would terrify me deeply. Even if another one popped out and started fighting the other, it would be very scary.

I don't know how many of you remember back in 2007, but the hype machine surrounding this movie couldn't have been any higher. We got a single trailer attached to "Transformers" in summer 2007. It wasn't set up like a normal trailer. It was one continuous scene. Followed by just a date, that date was 1-18-2008. We didn't get a title, or anything like that. Just an image of the head of the Statue of Liberty flying through Manhattan, landing in the street with slashes on its face, followed by a date. It was a great hook. The next day, movie forums and websites were up in arms trying to figure out what it could be. Was this a new Godzilla movie? Was this a rampage movie?  Was it a Cthulhu movie? What does the monster look like? Is it definitely a monster? Could it be something else? There was an image that supposedly spoiled the monster design, which was a multi-armed giant killer whale. It was goofy looking, but the wanting of answers was felt every day until release.

The viral marketing campaign at play was also something. The 11808.com website was always dropping pictures, giving information surrounding the story of the movie (story that, at the end of the day, didn't play out in the actual movie, which drove some people nuts). The mythology around the story grew month by month. This viral marketing plus that of "The Dark Knight" was just amazing at the time. If you spent too much time on the 11808 website, you were startled by the roar of the mysterious monster. There were some things that were supposedly connected to the movie, but then really weren't, and it got wild trying to keep up with everything. It got you ready for the movie before it was even out, much like Artisan Entertainment did with "The Blair Witch Project" a decade prior. Even the title "Cloverfield" was shrouded in mystery.

When the movie finally came out, it divided viewers. Like I said, lots of people didn't like that the movie ignored all of the mythology set up on the website. Some people just thought it was dull. But I had a great freaking time. I still love watching it. I remember reading that people got motion sickness from the movie, but how the found footage is handled in the movie really worked for me, and the bad focus added to the crazy confusion of the movie.

I also liked that this movie at least tried to get us to care about he characters in peril here. Many people couldn't connect with the characters, but I did. I never thought that they were "rich douchebags" which they were regarded as online. Usually in these types of movies, the characters are secondary, because what we care about seeing giant monster mayhem. The Cloverfield Monster (as it was eventually called) was still very much a mystery throughout the movie. We don't know why this monster is attacking, what its goal is. So we have the characters to focus on, and we care just enough that when things get bad, we care what happens to them. The development isn't the most original thing in movies, but was executed well and it was enough to get me to care.

I still can't describe the Cloverfield Monster to save my life. It crawls on all fours, its got a bat-like face, without the ears. You can see a breathing apparatus on the back of its head. We never get good focus on it all movie, so it always feels like a mystery, which is fun. "The Cloverfield Paradox" would prove that the monster we saw was a baby, and these monsters can be much bigger then the one we saw in "Cloverfield." I also love the Hugger Alien-like mini-monsters that fall off the big one and they carry a crazy scene in the middle of the movie.

As far as found footage goes, this made for a fun time at the theater, and I was glad to see all the effort in the marketing paid off. I hope you all enjoyed this one too.
Posted by Shawn Hoelscher at 7:37 PM