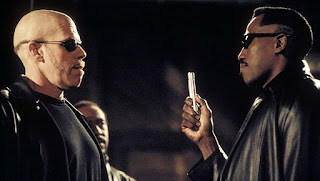 There have been plenty of super-cool vampire slayers throughout the pantheon of pop culture. While Buffy is well known and awesome, I have to say that my favorite is easily Blade. Blade a kick-ass trilogy which began in the tail end of the 1990's and ended in the mid-2000's. Wesley Snipes became a fan favorite among Marvel fans. I was very happy to learn this passed July that Disney is going to be bringing Blade to the MCU in the near future. Even though there are plenty of naysayers who think the MCU is unofficially done, I think we are going to be seeing a very different chapter in this next phase of the franchise. Personally, I am excited to see how that goes.

But I'm losing my train of thought a little bit. Let's talk about the Wesley Snipes movies, because as unfortunate as it may sound, Snipes isn't returning as the title character. He had a hell of a run with the character, and I hope he's forever happy about the work he did, because I know I sure am. Tonight, we are specifically focusing on "Blade 2." Why? Because its one of the best sequels of all time. And for a comic book movie, its truly spooky.

What makes a great sequel? There's plenty of them throughout the history of movies, and for my money there are some good sequels, several bad sequels, and only a mere handful of great sequels. So again, what makes a great sequel? If it improves upon the first film by strengthening what made the original good and taking away the bad, that's a great sequel. If its not just a remake of the original and expands the character and/or presents them with a brand new challenge, then its a great sequel. "Blade 2" takes the latter. Oh sure, we see our lead character slice up plenty of vampires in this movie, no shortage of that. But the sequel adds a new layer when Blade makes an uneasy alliance with a group of vampires who are trying to stop a new strain of vampirism that is quickly taking the world.

I always dug the idea of a strain where those infected would hunt both vampires and humans. I like the developments and provocation that comes with Blade having to work with a group of vampires to stop other, badder vampires. Especially when this group is lead by Ron Perlman. "Blade 2" was directed by Guillermo del Toro, so of course Ron Perlman is in this. Perlman's character Reinhardt never quite clicks with Blade and watching Snipes and Perlman play off each other is a gift that keeps on giving in this movie.

I also think only Guillermo del Toro could think of the ultimate presentation of the Reapers, the strain of vampires that literally hunts anything with blood in this movie. They look like Count Orlok in this movie, except their veins all over their bodies are red and their teeth are...well...indescribably crazy. They are vicious and watching them attack is truly spooky. Del Toro really milks the suspense in this movie, using shadows and environment to generate a huge sense of unease.

There are some who have made fun of the film's final battle. Where Blade battles Jared Nomak, leader of the Reapers and played by Luke Gross. I love that Guillermo fills his movies with fun jump scares, disturbing imagery and a general creep factor, then just throws his audience into good, old-fashioned, B-Movie mayhem. There's a little something for everyone who loves a good ol' slice of vampire fiction on display here.

Forget Van Helsing, Blade is my guy!
Posted by Shawn Hoelscher at 9:44 PM