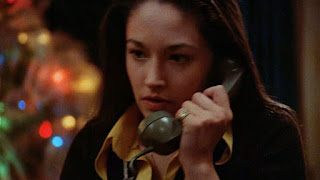 "Christmas is one of the most joyous times of the year, despite the suicide rate"

So said Bob Clarke, the writer and director of the original "Black Christmas," it almost seems like uncanny genius to set a horror movie around the Christmas season. The only worries we should be having around this time is how much money we are going to spend on presents, right? Or how we are going to handle all of our possibly obnoxious family in one house, right? Wrong, not this movie. In "Black Christmas," there is a rabid serial killer on the loose. He decides to visit a sorority house right before the girls leave or their Christmas break.

The movie is structured like a mixture between "When A Stranger Calls" and "Halloween." At the beginning of the movie, we see from the killer's point-of-view him climbing to the top of the sorority house and making his way inside. We never see the killer's face. Who is this guy? We never find out. The movie begins when one of the girls goes up to her room to pack for Christmas break, and the killer stops her and kills her in the now popular way of suffocation through saran wrap then propping her body in the attack on a rocking chair. Where she will stay for the whole rest of the movie. An investigation between the girls in the house commences, and every time one of them goes up to the attic, they die. We never find out why this guy is targeting the girls, and again, we never learn his face. He sneaks off at the end of the movie, never to be seen.

The movie also works like "When A Stranger Calls" due to the fact that the killer, whoever he is, keeps calling the girls and saying disturbing, vulgar things. A list of suspects builds over the course of the film, and of course they all turn out to be the wrong people. The phone calls continue and the killings likewise continue.

This slasher movie in particular interesting because the movie isn't all just women going upstairs one by one to get killed off. They try to develop the characters, moreso then we are used to in these types of movies. One girl gets pregnant by her boyfriend, and contemplates abortion, while the boyfriend tries to persuade her to marry him. A father comes down to pick up his daughter to take her home for break, but she is missing. The searches for various characters features better-than-average banter between characters. They tried harder for this one, so its easier to get wrapped up in carring about these characters.

Christmas horror is a very special, yet very small sub-genre of horror and we'll look at one other later this month.
Posted by Shawn Hoelscher at 7:32 PM