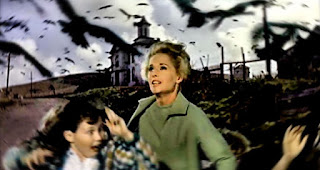 There was a time when I was a teenager, It was the summer before I went to college, and I got my first speeding ticket. I went downtown of my hometown of Peoria, to the city's courthouse to pay it. I remember parking in a garage not far from the courthouse. While I was walking to the courthouse, I was attacked by a bird. Some people who worked in the downtown area made some comments. But I couldn't believe it. I was already aware of the "The Birds" movie by Alfred Hitchcock, but I would have never guessed that a bird would actually attack a person.

That's the charming power of "The Birds." It takes animals that always come off mostly harmless and turn them into savage monsters. Somebody said something pretty powerful. Swarms of anything is scary. Whether its bees swarming, locusts swarming, even birds swarming, things swarming is very scary and I think Hitchcock understood that. Imagine if a swarm of birds randomly attacked you. Imagine being pecked to death slowly. That's sounds like a terrifying way to go, and its something you can't help but think about.

Hitchcock usually didn't focus much on exposition. We never find out why the birds decided to terrorize a town. Can you possibly think of an explanation which would be satisfactory? Its scarier just not knowing why the birds decided to attack. The movie is about trying to survive a time when everything goes to hell, we don't really need an explanation. The movie works without it. Once the characters have survived, that's the end of the movie.

That's really why we watch, right? We want to make sure the characters live in the end?

I'm not sure any of you will look at birds the same way after this one. Even today, this movie still holds power. In the early 1960's, movies really weren't that violent. So a movie featuring bloody bodies was taboo at the time. A dead body missing both its eyes was taboo at the time. Hitchcock was obsessed with breaking rules, ignoring the traditions of the day. I can only imagine that audiences of the 1960's had to have lost their minds over this.
Posted by Shawn Hoelscher at 7:34 PM