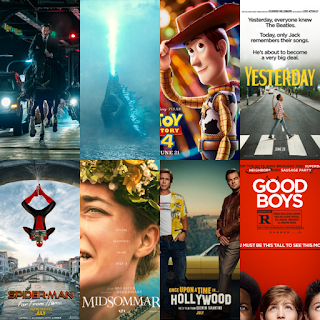 Other than Roger Ebert, the main voices I read in the film criticism world growing up were several online voices. They always talked about the summer movie seasons of the 1980's and how wild and fun that was to grow up in. I sat back always wishing I had a time like that in my own childhood. I didn't go to the movies enough in the 1990's to remember, because those were my formative years. My teenage years I remember vividly and the summers of 2000's were always hit or miss when it came to summer movies. I don't mean each season of each year, but mean month-by-month. I don't really remember the summer movies seasons being by-and-large that great in those days. Until the decade got closer ending, of course. Summer 2007 was good, but 2007 was just an all-around excellent year of movies and summer 2008 was the best summer movie season I ever lived through.

The last few summer movie seasons have been really good and I do wonder what kids and teenagers have been thinking, because its got to be a ball growing up in these movie summer seasons of late.

Which isn't to say that there weren't a few disappointments. I wish I could have liked "Men In Black: International," "X-Men: Dark Phoenix" and I wish "The Lion King" made me forget about the animated movie. But we can't win them all and even the disappointments added to the flavor of what made this season a keeper.

It didn't matter if something came from the mainstream world or the independent world, it seemed like everything was playing at high pitch. Things like "Godzilla: King of Monsters" dazzled just as much as things like "Blinded By The Light" did. You could almost go to your movie house, choose something at random, and you'd be delighted.

Some quick comments on some movies that I didn't review...I wish I could say that "Tolkien," the movie about how J.R.R. Tolkien came to write "Lord of the Rings" and "The Hobbit" was something special. It ended up just being another biopic movie. Not much surprising and very much ordinary. A movie that didn't feel like a typical biopic? "Rocketman." This movie did something that I wish more music biopics would do, they turned the life of Elton John into a full fledged musical, and it works. The movie is so much fun and I think everything missing from "Bohemian Rhapsody" was in "Rocketman." "The Secret Life of Pets 2" was just a sequel and not much more. I never got around to seeing "Aladdin."

What was your favorite movie of the summer?

Bring on fall!
Posted by Shawn Hoelscher at 7:17 PM