Is the Age of Nostalgia really working for you? 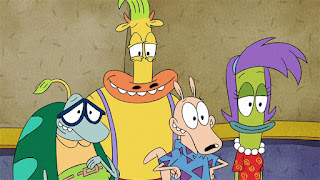 This was originally going to be a write-up on "Rocko's Modern Life: Static Cling," the new short film on Netflix, and the first time Rocko has been on any type of syndication in a long time.

But, that won't be happening.

Sure, I watched the short. I enjoyed it. I was a fan of the animated show growing up. It had some funny moments of Rocko tackling modern life, and threw in some good puns here and there. But one thing kept nagging at me in the back of head. That nagging translated out to the following: did somebody somewhere really ask for this? I know fandoms create petitions and GoFundMe's all the time for revivals like this, with some arguably successful results, but was anybody's life really incomplete without Rocko in it anymore?

As we round out another decade of entertainment, it feels like we are living in the least creative time for screened media that I can name. Maybe I'm just missing something and when TV and film historians look back on this time many years later, maybe they'll have some bigger positives then I do. But I can't help it, we have become obsessed with what I can only describe as an Age of Nostalgia. Television has revamped several television shows. Disney keeps making live action movies of old animated classics. Things that haven't been popular in years are being talked as movies or shows. Just today I read about a new "G.I. Joe" spin-off series in the works, and I wonder, for how unpopular the first two movies were, why even bother?

I mean, the lack of creativity at the movie theater is already pretty daunting. Just a quick skim of Fandango would tell you that. Ask yourselves what the last movie you saw in a theater was that wasn't part of a franchise, wasn't based upon a comic book or novel, wasn't a spin-off, wasn't a remake, wasn't a prequel or sequel, wasn't some shameless rehash. It's a tough question to answer, isn't it? It's not like the 1990's where indie cinema got a fair shake, if you want something different, a true original voice, you literally have to WORK for it. Hell, genre movies aren't even trying to outdo anything else. Everyone studio is incorrigibly chasing "The Next Star Wars" or "The Next Game of Thrones." Apparently afraid to just make the next Big Thing.

I would also argue that this need to satisfy our nostalgic needs kind of plays into that. We would rather see a relaunch of something from their childhood than see someone try something new or different. I have to ask, is that what we really want. Is this really satisfying everyone? I can say for me personally, the results have been pretty meh. Live action "Lion King" did nothing for me, because its basically animated "Lion King," just with better animation. On the TV side, I only made it through a season and a half of "Fuller House," I only made it through a few episodes of "Roseanne" and the newest "X-Files" seasons were a waste of time.

The thing is, I really enjoyed "Twin Peaks: The Return" and I still hold lots of love for "Mad Max: Fury Road," and I think the reasons those two things clicked with me is that they were updates that still felt apart of their old worlds. They presented real development instead of treading water (which I think the shows above only did.) I may not be crazy about "Static Cling," but it at least had some funny insight of what it would be like now that Rocko is in a modern world, and they milked some good laughs from that concept. We can't just pretend time hasn't gone by, I need updates to be smarter and more clever, not just the same thing over again. Why even do that?

But there needs to be a balance, something that gives people what they want, without completely changing what it is they are making. Take the upcoming animated "Addams Family" trailer. I don't know what that is seriously supposed to be, but that ain't Addams Family...

You can go too far to different that it makes the thing you are trying to make unrecognizable. As with anything, there needs to be a fine line between an update and the same that needs to be struck for it to really be successful.

At the end of the day, I long for things that are new. I like being challenged. I like the potential of seeing something become a new franchise and we are just redoing everything, and making franchise of stuff we liked as kids, it doesn't allow for new creations. That makes me kind of sad.

Am I the only one? Do you honestly think "Top Gun 2" will work literally 33 years later? Are you counting down the days for the "Avatar" sequels? Are you longing day by day for a "Xena: Warrior Princess" reboot? Should I send Hollywood my scripts for "Street Sharks" and "Lost: The Movie" to see if they get made?

It seems the results are mixed at best. The DCEU is completely revamping what they are doing their DC superheroes, not connecting them to a universe. Universal Studios keeps trying to make their old school universal monsters a thing, and they've failed twice now. Nobody came and saw "Independence Day 2" in 2016. So I do wonder if it just depends on what the nostalgia is or if people are really asking for these things.

No matter what though, we are eventually going to run out of rebooting the things we love, then what are we going to do?

I was taught for years in school that each story has a beginning, a middle and an end. The end is part of the story. So I wonder if a story just keeps going on and on and on...does the story become less special?
Posted by Shawn Hoelscher at 6:26 PM