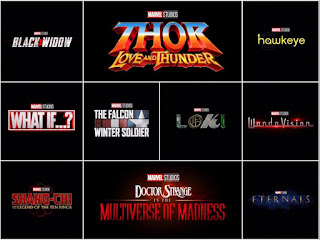 Well in just a few short minutes, the internet blew up!

We got our first look at what the Marvel Cinematic Universe is going to look like post-"Avengers: Endgame." The future looks beautiful.

For the movie side of things; we are getting a fourth Thor movie. "Thor: Love and Thunder" will star Chris Hemsworth, Tessa Thompson, and Natalie Portman. Yep, Portman is returning as Jane Foster, and she's going to be worthy! Literally. We are getting female Thor! The next sequel is "Doctor Strange: Multiverse of Madness" it will apparently be the first horror film in the MCU and will star Benedict Cumberbatch and Elizabeth Olsen, which I guess makes sense. The "Black Widow" prequel is coming, and will star Scarlett Johansson, Florence Pugh, David Harbour and Rachel Weisz, a damn good cast.

"The Eternals" is probably the most ambitious movie coming in the future, and will apparently be different from anything we've seen so far. It will star Angelina Jolie, Salma Hayek, Richard Madden, Don Lee, Kumail Nanjani, Bryan Tyree Henry and Lauren Ridoff. From that cast alone, I'm sold. We will also be getting "Shang-Chi" and that movie will involve The Ten Rings and we will finally be getting THE REAL MANDARIN.

The announcement also revealed some shows coming to Disney Plus. Comic-Con Patrons got a look at "The Falcon and Winter Soldier," "Hawkeye," "Loki," and "WandaVision" all live-action shows that will involve the characters we know and love (Loki will be a prequel show). We will also be getting "What If" which is based on a Marvel comic line and asked the simple question of what would happen if certain events happened a different way. It will be animated and will feature our favorite MCU characters being voiced by the actors who play them.

Kevin Feige also announced A new Blade coming to the MCU, will be played by Mahershala Ali! Don't know if it will be a movie or show. But that is big news.

Kevin Feige didn't have time to talk about anything else on the horizon, but he did confirm that "Black Panther 2," "Guardians of the Galaxy 3," and "Captain Marvel 2" are all in the works. Also he announced that "Fantastic Four" is being worked on. He ended the Marvel panel with the quote "No more time to talk about mutants." So that pretty much confirms we will be seeing the X-Men in the MCU very soon too! I know it was a battle to acquire the Fox characters, but its going to be so cool to see a complete Marvel universe in live action! This is the thing I've been dreaming of for years now!