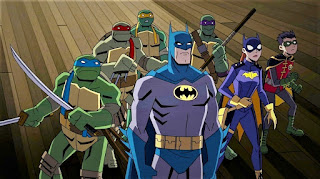 When I was a wee lad, I used to collect action figures. You can also bet I would soak up any cool cartoon I could at any given moment. I loved the "Batman The Animated Series." That will, in my mind always go down as the best Batman cartoon ever. Probably the best Batman series, period. Growing up in the 1990's, "Teenage Mutant Ninja Turtles" was at the height of its popularity as a cartoon. There were all sorts of action figures in my collection, characters from fandoms of all kinds. When I had friends over or if I was just playing by myself, I'd make up crossovers before making crossovers became cool.

If I were a kid growing up right now, I'd probably would have lost my mind for "Batman vs. Teenage Mutant Ninja Turtles." I definitely would have lost it growing up in the 1990s. Who wouldn't want to see Batman teaming up with the Ninja Turtles. Sure, sometimes they'd fight each other. But their heroes, it really isn't a spoiler that they'd come together as allies. Fans of either property is really going to love this movie. Its fun how it all comes together. Batman is the stern upper lip, no-nonsense leader and the Teenage Mutant Ninja Turtles? Well, they are just that, with each of their individual personalities still intact.

Shredder makes his way to Gotham City. He has formed an alliance with Ra's Al Ghul. The Shredder wants the secrets to the Lazarus Pit in order to achieve immortality, and Ra's Al Ghul wants the mutating ooze to make his assassins stronger in battle. The Teenage Mutant Ninja Turtles follow Shredder and his Foot Clan to Gotham. Batman is already investigating and can see something is on the rise. The two factions of heroes eventually team up to stop Shredder and Ra's. Along with a bunch of mutated Gotham villains.

Oh yes, imagine a Snake version of The Joker

If you've been having fun with the animated DC movies, get ready for their most ambitious crossover!
Posted by Shawn Hoelscher at 7:01 AM