Review: "Detective Pikachu" is about what you'd expect, goofball fun. 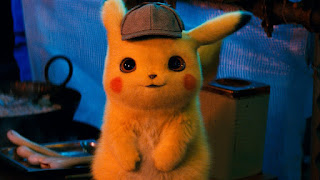 I am well aware that this movie is based on a manga comic book, one in which I have never read. But I did love me some Pokemon on Game Boy growing up. As the credits begin to roll at the end of "Detective Pikachu," there is an 8-bit scene very reminiscent of a duel playing Pokemon on Game Boy. For some reason, this made me smile big.

Now, I didn't like "Detective Pikachu only for this reason. The movie doesn't finally get good at the credits. Its a movie that proves Ryan Reynolds, live-action or voice, can do anything he pleases. Its a movie full of absurdity, but never forgets the characters on the way to the end. But overall, its a fun ride, even if it might be for a niche audience. This is a movie specifically made for Pokemon lovers. I am not sure it will convert the already uninitiated. So if you grew up liking and loving Pokemon, you will have to check this out. Get a little nostalgic. Go ahead and be a kid again.

The revolves around a city created for people and their pocket monsters aka Pokemon, to live together in harmony. Tim Goodman (Justice Smith) travels to this cohesive city, known as Ryme City to collect his father's assets after his apparent death in a plane crash. That is when a Ryan Reynolds sounding Pikachu suddenly enters his life. He is the detective partner to his father. Suddenly, Tim finds himself swept into a conspiracy that involves Pokemon reacting to a bad purple gas.

In some ways, "Detective Pikachu" is kind of a hard film to review. I mean, depending on yourself, you might find this movie a little too silly. Its about a young boy and a talking Pokemon running around solving a crime. Not exactly a storyline that gets you nominated for the Academy Awards. But by design, it was never going to be. Because this is based on a manga, I like that the designs of the Pokemon in this movie feel half real and half exaggerated. It kind of feels like you are watching a straight up cartoon, while also buying into the world full of pocket monsters. It continues to make you think you are in a fictional world. But the movie was only meant to be fun. This is not even close to a movie you take seriously. "Detective Pikachu" is very much about the Pokemon world and lore. It doesn't care if you can't keep up, it is very much a movie made for the Pokemon audience.

Which makes this tough, because its not exactly a movie I can recommend to everyone. Its such an inherently goofy movie that it might be easy to get lost and confused unless you have some vague knowledge of the video games already. That doesn't mean that the cast isn't good, because Justice Smith is a real find here. Ryan Reynolds is pretty much Ryan Reynolds. This is a totally different character from Deadpool, obviously. But Reynolds has made a career on certain ticks, mannerisms and personality traits. Not saying he isn't good, he's just Ryan Reynolds. Kathryn Newton has been a bright young actress for awhile now, and she turns up as Tim's love interest. Its a pretty basic character on the page, and she breathes some life into the role. Also Harry Potter fans will appreciate Bill Nighy appearing.

"Detective Pikachu" isn't going to rewrite the paradigm of cinema. But it is some fun to be had with the whole family. It has a harmless plot, fun characters, and a goofy setting and it should play well for kids of all ages and definitely fans of the Pokemon in general. I mean Mewtwo is a prominent character in this movie and he's on full display, and it is beautiful. It doesn't offer much more than that, but on the other hand, why should it?

FINAL GRADE: B
Posted by Shawn Hoelscher at 8:08 PM