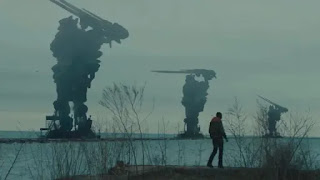 The alien invasion movie is something that is never going to go away. Maybe the sub-genre will fade slightly, maybe it will take a hiatus then eventually get revived. But it will never just go away. Let's be real, Westerns never really went away, they kind of come and go as they please. I also don't think the superhero genre will really go anywhere. Will they be as popular and box office hot as they are right now fifty years from now? Probably not, but I don't think they will actually go anywhere. There is something about genres that resonate deeply with an audience, and the fear of the unknown and the wonder of whether or not we are alone in the universe keeps us guessing what it looks like on the other side of said universe.

Between "Captive State" and "Annihilation" and "Arrival" we are starting to see some very different types of alien invasion movies. While I think the two later are much better compared to the former, I think "Captive State" is fairly well made little invasion film. It tries to be a little bit smarter and a little bit more ambitious then simply aliens come and us humans pick a fight. Instead, it tells a story about how an alien race was able to successfully take over the entire planet without, seemingly, any shots fired. That seems like complicated to the least. How can some aliens just show up on our doorstep and just take us over. It would be so easy to have these massive battles on Earth against an alien threat. But I give "Captive State" some credit for trying something out of the box.

The alien invaders come to be known as The Legislators" and like I said above, they invade Earth with seemingly little to know fighting. They soon take over every aspect of our lives, controlling everything with genuine ease. Apparently, they can't take our sunlight or our air very well? So they force humans to build underground cities for them to live and only certain government officials are allowed in. Nobody else is though. Of course some humans will get mad about this, and a resistance was formed to combat these aliens.

Do I think the story is very original? Not really, but most of these movies work the same. I think where "Captive State" succeeds is in its execution. This takes a sort of real world approach to an invasion. As real world as these things can possibly get, at least. The movie has a real world feel. It feels realistic, it feels gritty. Its brought together by an excellent ensemble. John Goodman, Vera Farminga, Kevin Dunn, Alan Ruck, and D.B. Sweeney round out the supporting cast. These are guys who usually rarely populate movies in the background. But they've mastered that artistry, and they all do great work here. Ashton Sanders, who did incredible work in "Moonlight" a few years ago, shines bright as our eyes into this new, very dangerous world. He has links the human resistance, and he has to play both sides just keep things flowing. Its another profound performance by Sanders, and I think he's got a great career ahead of him.

Plus, I don't think many rappers who try to be actors fair very well. Sure, Ice Cube is really good and has had a nice career. While Eminem was good in "8 Mile," he was basically playing himself. I have to say after both "The Dirt" and now "Captive State," that Machine Gun Kelly can disappear into a role with some ease and he's going to be someone to watch out for in the future.

The treatment of the aliens is pretty clever. We only get glimpses of them in shadows and fog. They seem to have spikes, but other than that, they aren't that interesting looking. Which may explain why they spent much time in the shadows. But this isn't really about how the aliens look. This is about a new world created after being colonized, and how that would sting to some and feel almost like salvation to others. It's a character study of how we find strength inside ourselves in the most overwhelming situations. "Captive State" may not hit a home run out of the ballpark, but it will be a good holdover until summer gets here.