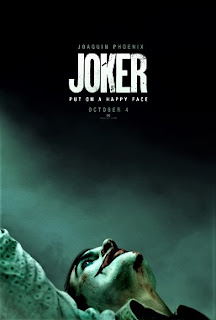 I was getting breakfast with an old friend over the weekend, and we were talking about the future of the DC movies. When I told him that DC Films might take a break from the DCEU for awhile, and make DC movies independent of the shared universe. He got a good laugh from that, and I get it. I can only think this will cause mass confusion for the casual fans. It is causing confusion for me, especially since after "Aquaman" and the good things I am hearing about "Shazam!" it seems the DCEU is finally starting to course-correct.

We've been seeing lots of The Joker recently. From Cameron Monaghan's portrayal on Fox's "Gotham," to Jared Leto's performance in "Suicide Squad" and even watching him show up as a minifig in "The LEGO Batman Movie." The character is becoming this close to being overexposed and just plain incorrigible to see on a regular basis. One of my favorite things about The Joker is that we never know where he came from. Sure, there is "The Killing Joke" comic story which served up an origin story, but you find out right at the end that he might have made that whole story up. In fact, also in the current DC comics, Batman recently asked a super-computer who The Joker truly was. Not only did Batman not get an answer from the super-computer, but he found out that there are actually three Jokers running amuck in Gotham City.

So it still seems odd to me that DC suddenly wants to explain the character away. Although it would be an incredible reversal to watch the whole movie in October then find out at the very end that Joaquin Phoenix's character made this whole movie up. That's truly the twist ending I am pulling for currently.

I will say that the first trailer for the movie is interesting. It doesn't completely grab my attention, but I can't in good faith say it looks totally bad. It is said that this movie will be a character study on how a person goes insane, and that could be interesting. I have to say that I am not totally digging Phoenix's look. The Joker has a very distinct look, whether you like it or not. I get the need to remove yourself from what's come before, but the movie will walk a fine line between a Joker movie and a movie about a crazy guy who wears make-up.


They are definitely playing with some Batman mythology and iconography here, so that's a relief. One thing is also for sure, Joaquin Phoenix is going to throw himself at this role, and it should be worth the price of admission just to see what he does with it. The cinematography and mood of the trailer was better than expected. Like I said, it looks interesting. At this point, interesting is enough.
Posted by Shawn Hoelscher at 7:24 AM