A look at the "Child's Play" remake 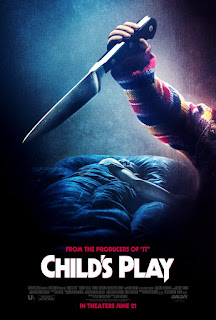 First of all, I got to say, that is a great, old-school poster.

The trailer for the movie itself? Well, there is definitely some good and bad stuff. I really don't understand the continued need to remake everything that was scary from yesteryear. Although its a trend that has been going on since I was in high school, its a trend nonetheless and something that has had mixed results at best. This remake has a fun cast, including Aubry Plaza, Tim Matheson and Brian Tyree Henry. Not to mention I am sure Mark Hamill will have a blast voicing Chucky. It looks like they have come up with some creative ways to kill people. Connecting the doll to an app just seems like a real lazy way to throw an update into the movie and doesn't really portray the character in any kind of new light, but I guess, what else could they really do?


The original Child's Play really creeped me out, we'll see how this remake does.
Posted by Shawn Hoelscher at 7:03 PM