Why are we Over-Explaining our villains? 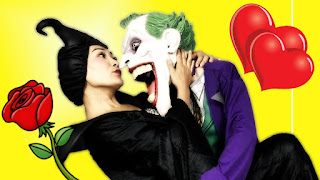 Back in 2014, we got a Maleficent origin story from Disney, starring Angelina Jolie. You know Maleficent, she's the villain from "Sleeping Beauty." Just a few months ago, we learned that Warner Brothers and DC Studios was going to make an origin story about the greatest supervillain of all time, The Joker. Disney is already planning a sequel to "Maleficent" and...get this...they are also developing a Cruella De Vil origin movie. Yes, you read that right. An origin story about Cruella De Vil. It will star Emma Stone and potentially Nicole Kidman. Stone will play the titular character, while Kidman plays the antagonist. Yep, because you know, all these Disney villains are really just misunderstood and they are evil because they are diverting us from a greater evil. But I get off topic, are you ready to learn why Cruella De Vil ended up hating dogs in the first place?

The big question I have for any of these projects is a resounding "Why?"

Before we get too far in the comment section, let me tell you. I DO know why. We are living in a lazy slump in our cinematic entertainment field, and the studios are literally doing everything they can to make money off relevant brands. And I do mean anything. They are taking moneymakers from yesteryear and swapping the main characters' genders. They are taking books, no matter how short, and padding them out into trilogies. They have become obsessed with world-building, so not only do these brands get sequels, but prequels and spin-offs. The studios have become so dependent on these tentpole movies that they've over-saturated the field. When was the last time you looked up movie times online or a newspaper and saw a title you didn't recognize? When was the last time you saw a movie that was being driven by its idea or the A-list stars in it? Instead of it being a piece of nostalgia from when you were growing up? I'm going to try not to hit this point home too hard. I've written about this a few times. I just understand the concept behind the need for this type of movie.

The thing I'm actually worried about here is that Hollywood is going to kill what makes villains special in the first place. Hollywood has become too obsessed with demystifying villains, when I think it works better when we don't understand why these villains are so evil. It started young. I remember in high school, finding the "Hannibal Rising" movie interesting, because at the time, I was interested in how they'd explain how Hannibal Lecter began eating people. What happened was the origin story of Lecter becoming a cannibal was so flaccid, so ordinary, and so profoundly cliche that I didn't care. I really began to understand that what makes a villain scarier and larger-than-life is that they ARE NOT explained. Because usually the explanation given is nowhere near as interesting as the ones we build up in our heads.

What disturbs me the most about this trend is how Hollywood is obsessed with the audience sympathizing with the bad guys. Again, with "Hannibal Rising," the whole reason why Lecter becomes a cannibal in that series is because some Nazi's trapped him and his sister when they were young. The Nazis had no food, so they ate Lecter's sister and tortured Lecter himself. Makes sense, right? Of course, he goes out and gets his revenge, those Nazis wronged him bad. "Maleficent" did something similar, and setting up Nicole Kidman as the bad guy who is responsible for turning another bad guy into a bad guy is not killing the reason we love the said bad guy in the first place, not only does it take away from their mystique, but it allows us to feel good about their bad behavior. Hey, its perfectly okay that Hannibal Lecter became a lifelong cannibal, his sister was eaten by Nazis. Right? So its okay for him to be a villain, because look what he went through, right? I mean, we have to make sure Disney or any other studio for that matter doesn't start buying up schools. Can you imagine the revisionist history lessons we'd get on people like Adolph Hitler or Saddam Hussein or Osama Bin Laden?

Maybe I took the metaphor too far at the end of that last paragraph. But you'd think that Disney, with all of its kid-friendly, do-good wisdom, would know better than to make children feel sympathy towards bad guys. Shouldn't we be teaching children the lesson that doing bad is wrong? That crime does not pay? That pride comes before the fall? No, these movies are basically saying, "Hey, under the right circumstances, its okay to be bad then lead a life of villainy afterward. Just as long as you be bad to other bad guys first." That feels inherently wrong to me, and I just hope that kids don't take the wrong lessons from these movies.

My main point is that I really am against over-explaining every great villain, because not knowing how somebody became so terrible takes away their power. I don't need a trilogy explaining why Sauron became Middle-Earth's Dark Lord. The little origin we got on Voldemort in the "Harry Potter" movies was enough, I don't need a trilogy on that. I don't need a trilogy on why a young Palpatine turned to the Dark Side of the Force. Does Paramount Pictures need to make a origin movie on Anton Chigurh? Or any of the Universal Monsters? Remember, "Dracula Untold" was a box office bomb. Do we really need to know how somebody as demented as The Joker became who he became? Even the most detailed explanation of The Joker, found in Alan Moore's "The Killing Joke," turned out to be psychotic hoopla The Joker made up in the end. It also gave us another great example of how sick he is inside. Do we really need all that explained away? I get why there was an origin of sorts for the character in 1989, the comic book movie was a different animal back then. Still trying to find it's footing. But the best thing "The Dark Knight" did was never explain Heath Ledger's Joker. I don't get why you'd want to ruin that.

What do you think? I know where my heart lies.

And I will lose all faith in humanity if some studio gets David Lynch to explain Frank Booth. Seriously.

Click here to read about that Cruella De Vil movie.
Posted by Shawn Hoelscher at 7:00 PM