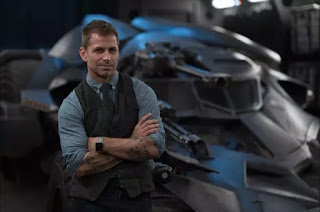 I've always liked Zack Snyder as a filmmaker, I think he has a unique eye. Even though he's often dealt in excess, I have enjoyed some of his movies. I am a big fan of "Dawn of the Dead," "300," and "Man of Steel." I think "Watchmen" was a valiant effort to bring to life such a profound and powerful graphic novel. However, I don't think it quite worked and I think that story is impossible to translate to screen. I couldn't stand "Sucker Punch" and I couldn't stand "Batman vs. Superman." But "Justice League" wasn't bad for a Frankenstein Monster. He's a talented guy, but I am starting to think he's kind of crazy.

He's recently been going on a tangent in the interview circuit recently. He's been discussing what he really wanted to do with "Justice League" and he's been relishing in the style and tone that he set for the DC Extended Universe. He's been saying such things as Batman kills and Superman kills and we need to wake up, grow up and get over it. Hmmm...okay, Zack.

There is a tone war going on between fans of superhero movies, and it has gone from a simmer to a boil recently. Basically one group will call you out for liking "lighter" superhero movies, a la Marvel and the other side will ridicule you for liking the darker, angsty, serious-toned" superhero movies. It seems like some kids who grew up reading these stories grew up, and expected the stories to grow up with them. To their defense, who can blame them? The year 1986 gave us "Watchmen" and Frank Miller's "Batman" stories, which brought a sudden darkness to comic books. Suddenly, these funny books could be more than that. So shouldn't superhero movies reflect that darkness? Should superhero movies be light or dark? Can we have a world with both?

For my money, it really depends on the character. There are some characters, based on their written history and their style of character, work in grittier storytelling. The Punisher is one of them. Wolverine is one of them. Spawn is one of them. Batman can actually work both ways. I think the reason why Batman is my favorite, and why he's so many people's favorite, is due to how flexible he is as a character. I love that there are Batman stories, like the 1960's TV show or the Brave and the Bold cartoon that play lighter. But then I can play the Arkham games or watch the Christopher Nolan movies and enjoy those darker, somber rides as well. He's a character that has changed a lot over the years. Captain America is another character that can alternate between the two extremes. If you noticed, the Captain America movies play more serious than the other MCU movies. Captain America has always been an American propaganda piece, and his stories have always been comments on America. Not all of those comments were pretty, and there has always been a political thriller edge to many of his stories.

But let's be honest here, that's only half of a handful of characters. I think overall, superhero stories in general feel weird when they are dark and serious. They are, in fact, stories about people getting strange powers then fighting other people with strange powers in colorful costumes. What about that sentence screams serious and gritty? What about that sentence means it has to cater to emos and goths? These aren't stories that take place in the real world. These are stories that aren't afraid to wink at you. So must we over-complicate things?

Superhero stories also have always (mostly) catered to kids. They are supposed to appeal to kids. So if you expect every superhero story to be a dour, murky-fest, you will definitely alienate most of the target audience. Superhero stories have always played goofier to appeal to their target audience. Let me ask you guys a serious question. If you saw "Justice League," do you remember the part where Wonder Woman and Bruce Wayne are talking about Mother Boxes? Remember how serious they were talking about a planet destroyer called a Mother Box. Did you honestly not snicker the whole time two superheroes were having a serious conversation about Mother Boxes? How could you honestly not laugh your ass off at that?

I'm not trying to say that every dark superhero movie is a failure. I'm not saying that superhero movies can't be serious, but its all about a good balance. The Marvel Cinematic Universe movies are so popular with audiences because they understand that balance. They contain lots of funny material. But they keep the movies human too. Despite what hardcore DC fanboys tell you, there are stakes to those movies. They are light, vibrant, colorful, optimistic movies. But with than humanity in tact, it makes the serious moments count even more to me. With all the build-up towards Thanos and knowing how well the characters already worked, it hurt harder when Thanos snapped his fingers. We hadn't seen a scene like that before, and it certainly hurt.

There is a huge difference between that and then something that feels like a constant assault. We already live in a cynical hard world. I don't need my superhero movies to be equally cynical and hard. It's not cool to me to make Superman edgy, because what makes Superman himself is that he is the beacon of light when the world is dark. Let me also say that "The Amazing Spider-Man" franchise didn't work because it adopted the "edgy is cool" mantra, and look where that got it. Has Spidey had some dark moments in his history, yes he has. Treat those moments seriously. But he's also a kid with superpowers and he's trying them out and he's got a colorful costume. He's super smart and he taunts his enemies just to fuck with them. That's the nature of the character and so far only Disney-Marvel has got him 100% right.

Ask yourself if you want a "dark Ant-Man movie" a "dark Guaridans of the Galaxy movie?" Why? What's appealing about a dark movie about a guy who can shrink himself and talk to ants?

I think there is also a big difference between a serious movie and a dark and dour sadfest where every character is pissy and there is not a shed of light anywhere. That was the type of universe Zack wanted to make with the DC characters, and very few of those characters fit that bill properly. I think the people voted with their dollars though, and proved what they really wanted from the genre. I don't mind serious superhero movies, but I want to feel good leaving the theater. I don't want to leave the theater after a superhero movie feeling like crap.

If that happens, someone somewhere didn't do something right.
Posted by Shawn Hoelscher at 8:52 PM