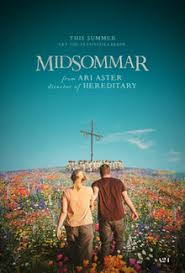 So allow me to explain how I got here tonight.

When I discover something I like or am excited about, I get obsessive. That means music, shows, music, comics, books, restaurants and yes, movies. I have to find out all I can about them. I've ruined movies in the past for reading spoilers days before seeing something, but to me, it wasn't ruining it. I just love being obsessed with the things I love. I am as open minded as anyone can be about any movie, but I do have favorite genres. One of those favorites is the horror genre. You'll probably remember my review of "Hereditary" by Ari Aster, it was a good movie, but not one I considered great. It definitely became great after repeat viewings, and its a movie I can honestly say I love now. Even before though, I put Ari Aster's name in my mental list of people I need to lookout for. Beginning to love "Hereditary" was just the icing on the cake of fandom.

"Midsommar" is Ari Aster's upcoming movie, and we discussed the trailer here the other day. It was basically love at first sight as far as I'm considered. The rest of the day, I wound up in that insane bit of obsession again. I watched the trailer many times, I watched trailer analyst videos. I read all I could about it. That's when I stumbled upon a script. Apparently, the script. The script for Ari Aster's "Midsommar." I read the script, top to bottom, twice.

Before you ask, yes I think the script is legit. There were one, maybe two typos that I thought were silly, but overall its a professional-looking, well-rounded, well-written script. Dialogue and scenes from the trailer are featured in the script and it does have Aster's name on it. Plus, I would be very impressed if some asshole watched the trailer, then built an elaborate script, featuring scenes from the trailer, making it coherent in a day. That would take some wicked dedication, so I have to believe this is a legit script. The script is also dated "April 2017," so it looks like Aster's been working on this even before "Hereditary" came out. There's a rumor on the internet that Aster has a stack of original scripts ready to go, and he's been waiting for the right studio to pick up his movies. Apparently, the right studio is A24. If Aster plans on releasing a great horror movie every year, I'd have no problem with that.

Before we get into this script review, I want to say a few things. I really hope people don't see this movie then just write it off, saying it's the same as "Hereditary." Yes, both "Midsommar" and "Hereditary" share many characteristics. They both feature dysfunctional family units. They both feature secrets. They both deal in the occult. They both have a slow burn pace to them, even though I'd argue "Midsommar" takes a bit longer to get going than "Hereditary." Plus, they both feature hallucinations dealing with ants. Makes you wonder if Aster himself has some kind of phobia with ants. Let me remind you that there are several filmmakers who have built entire careers on essentially making the same movie. Steven Speilberg deals in both science fiction and history, and he works with the same anesthetic for each genre. Woody Allen (if we even feel comfortable discussing him) deals with cheating and divorce in all of his movies, even those which aren't about relationships. Quentin Tarantino has essentially made a Western each time out, wrapped in a revenge fantasy. "Pulp Fiction" being somewhat of an anomaly. Even the glorified Christopher Nolan repeats himself. Rewatch "Memento," "The Prestige," "Inception," even "The Dark Knight Trilogy." They all deal with flawed men trying to better their worlds, only to make things worse not only for them, but for those around them. Doesn't mean they literally make the same movies over again, they just approach similar themes in different ways, Aster is just like them. "Midsommar" is similar to "Hereditary" but also very different.

Some may also write it off because they see lots of "The Wicker Man" in it. That will be a shame too. Like I said last weekend when I reviewed "Greta," we soon won't be judging movies based on originality, but in execution. Even with "Hereditary," you can see the movies and the influences of other artists that Aster soaked up while writing and directing that movie, but he took those influences and made something totally his own with it. He does the same thing with "Midsommar." Sure, knowing the cult genre, you'll be able to piece some things together, because how could you not. Of course this movie has to do with death. But that's the horror genre for you, it forces us to confront death. All I am saying is don't write this on off because it simply shares similarities to other movies.

This movie will center on a twenty-something girl named Dani, and to put it in simple terms, Dani is a very sad girl. In the opening pages, her parents are sick with something, and she communicates via Email to her sister Terry about her parents conditions. Terry seems to be the sole caretaker of their parents. Dani's parents' condition is getting so bad that not only is she worried for them, but its putting strain on her and Terry's relationship. We get the feeling reading the script that Dani already suffers from anxiety, and possibly depression. She has a boyfriend named Christian, and sadly he's not much of a help. You can tell he cares about her, in his own way. But he feels one foot out the door. He can't decide if he should break up with Dani, he just can't handle all the baggage that comes with being with her, and its driving him mad.

Soon, Dani finds out that not only did Terry kill their parents, but she also kills herself (how Terry decides to do this is particularly chilling.) After that, its safe to say that Dani is an emotional wreck. Christian breaks the news that he's planning to go to Sweden with his friends, Josh, Mark and Swedish native Pelle. Pelle is going to take them to a Midsummer celebration in the secluded town he grew up in. At first, Dani finds this information out in a dishonest way, dishonest on Christian's part. But then he turns into something therapeutic for Dani. After everything that happens, maybe its good for them to get away. This group is still in college, and Christian and Josh are planning to write college thesis' on what they see here.

So, Dani ends up going to Sweden with Christian, Josh, Mark and Pelle. At first everything is nice. The celebration takes place in big, open, secluded greenery. Seemingly like a big park or campground. They get high on mushrooms, they meet lots of nice people. Mark and Josh can't keep their eyes off of all the beautiful women they find there. As things progress during this nine-day midsummer festival, things only get stranger and stranger. Nothing seems to be as it seems. Also like "Hereditary," your perceptions of events are going to be messed around with as you see things unfold. Its clear on the page that Aster is going to be showing us sinister scenery even if nothing overtly horrible is happening on screen. It feels like he will be generating a sense of unease even though everyone is walking around, smiling and happy. It's a slow burn like I said, but leads to an ending that is absolutely horrifying.

He's also going to be testing our eyes and stomachs, because a good horror movie always does that, correct? There is a scene where a girl sits over a cup of coffee and lets blood from menstration drip into it, then serves it to a boy. The girl then makes the boy a pancake with her own pubic hairs in it. So yes, there's going to be some disgusting stuff. There's some disturbing stuff. Doesn't seem like boo scares are really on Aster's mind. But that didn't seem to be an issue with "Hereditary" either. It seems there is a new age of horror that is beginning to assert itself. Ari Aster. Jordan Peele. Robert Eggers. These guys aren't concerned with found footage. They aren't concerned with the cheap thrills. They aren't concerned with teenagers who can't act getting chopped up. They seem concerned with scaring the crap out of their audiences. All I can say is thank fuck for that!

But its not all about the horrible imagery. The movie has much to say about belonging and finding a family, no matter what form that comes in. The movie seems to be telling us that if we are alone, that we are adrift and drifting through life is not good for us. Sure, you can maybe do it for a little while, but eventually you will become lonely, and loneliness leads to lots of unhappy thoughts and disturbing behavior. We are social creatures, we thrive on social actions. When we don't have those actions, we are pretty much dead. There is a strange beauty to the ending of "Midsommar" that I found profoundly odd. Simply because beauty isn't something you expect from a horror movie. But I'd be lying if I didn't think that "Midsommar" builds towards something important, and it seems like Aster is somebody with something to say.

Overall, "Hereditary" wasn't some fluke. "Midsommar" solidifies Ari Aster as a horror storyteller and I welcome the potential fact that he's got a bunch of scripts just waiting to be produced. A big kudos to A24 for getting these up and running. While the mini-studios get absorbed by the massive studios, and while those massive studios take chunks out of each other, its nice to know that some studios are holding on, making worthwhile content. Our theaters are littered with sequels, prequels, remakes and adaptations. We are living in a Nostalgia Overload. While I'll admit that I've liked a lot of it, I am also starved for the new. I hope A24 can continue to do its thing and I hope we allow people like Ari Aster to flourish.

So horror fans, yes, mark your calendars. Check this out this August.

In case you missed it, the trailer one more time...

Posted by Shawn Hoelscher at 4:46 PM