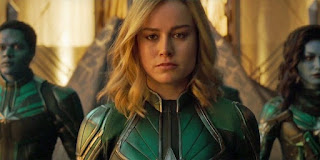 Its hard to believe that "Captain Marvel" is the twenty-first movie in the Marvel Cinematic Universe. Twenty-one movies ago, even though we'd seen many superhero movies up to the point, they were still met with a certain degree of skepticism. Not only has Hollywood moved passed that skepticism in a huge way, but studios depend on these types of movies just to have a good fiscal year. They have changed the entire landscape of the business. No matter what you think of Marvel as a brand or as a comic distributor, they lead this charge. They deserve heaps of credit for making superhero movies a big thing each year.

Now that we've had so many superhero movies at this point, I think its time to start changing the dynamic of them. Its time to stop playing by the traditional rules and have more fun. We also have to make the origin stories come alive better and have more fun with them. If there is one huge complaint I have regarding "Captain Marvel," its that the origin story feels just like that...an origin story. Characters in this franchise have proven so interchangeable that perhaps its hurt the origin story when introducing new characters. I will admit that I kind of have a tough time sitting through "Thor" and "Doctor Strange" simply because they treated those origin stories so plainly, in such a pedestrian manner that they come off a bit boring. I get it, budget restraints kept many of the earlier films from being every bit as epic as they could have been. But as we've moved more into this genre, and based on how much money even the shittiest of superhero movies make studios, you'd think they would fork over bigger budgets to directors.

By now, you know if you are on the Marvel train or not. If you've paid close attention to this very website, you know I'm a Marvel boy. You know I love this franchise with every fabric of my being. You know I anticipate each new Marvel movie every year. There are millions and millions just like me who have been bit hard by the Marvel bug. Again, they were the first ones to create the cinematic universe, and I have fallen in love with what they've accomplished. You can call me bias all you want, but I still have an entirely open mind to every new movie I sit down to watch, and that includes these Marvel movies. I want each of them to shine. At this point, its pretty much impossible for Marvel to make a boring movie. So yes, "Captain Marvel" is a freaking fun film. Every bit of the Marvel spirit that has been developed thus far.

"Captain Marvel" steers straight through the typical Marvel formula. There's this extraordinary person named Carol Danvers (Brie Larson), but when we meet her, she's just Vers. She's lives on a planet occupied by the Kree Empire, aliens we've grown accustomed to in this franchise. She is a member of the Starforce, an elite fighting squad of Kree warriors who are at odds with an evil alien race known as the Skrulls. The Skrulls are sneaking little bastards who look like gremlins, but can shape-shift, becoming any being they lay eyes on. Danvers is haunted by dreams, dreams of another life, a life she can't really comprehend. She knows these dreams mean something, if only she could figure it out. When she accidentally crashlands on Earth after a fight with some Skrulls goes wrong, she is ready to investigate her past.

No matter what I say about the plot, it basically boils down to bad guys wanting to do something bad and the good guys going in to stop them. No matter what these Marvel movies try to do, they all take that form. That can sometimes be a little aggravating, if you want to see something a little different. But no matter how they try to cover up the story with twists and turns, "Captain Marvel" feels like its built from the same kit as all the other superhero movies. But hey, I guess that makes them true to form. Why reinvent the wheel? There are twists and turns in the plot, and that makes this particular ride much more fun. The pacing could have been a little bit better. But I'd be lying if I wasn't continually swept away in the mystery and the adventure of this movie.

I have to say too, I am shocked by the cold reaction to Brie Larson. Maybe I'm just biased, because I've always loved Brie Larson. She was an out-of-left-field choice for this character, one I never considered but felt was ultimately perfect. She's an Oscar winner, she knows how to build a character. Is she kind of no-nonsense in this movie? Absolutely. But that's true to the nature of the character. She looks like a soldier. Sometimes she comes off like a blank because she's a fierce warrior, and she wears that side of her character well. That's not to say that Larson doesn't have any fun, because that's not true. She has plenty of fun and she makes Carol relatable. I'm sorry some fanboys were sad because her boobs weren't big enough or her butt wasn't big enough or she never put on the sexy superhero costume. But none of that has to do with this movie or this performance. Larson did a great job here.

Samuel L. Jackson and Clark Gregg are pretty much totally Nick Fury and Phil Coulson at this point, just know both of them do a good job. It was also fun seeing Lee Pace and Djimon Hounsou return from "Guardians of the Galaxy." No doubt the most controversial character(s) are played by Annette Benning. Too bad fanboys can only see what they are used to reading comics. Yes, Benning plays a character who was a man in the comics, but that doesn't mean that Benning does a bad job. I kinda feel hypocritical for saying this. Because some of the gripes I have come from knowing the comics. Being a comics fan myself, these superhero movies can be tricky to review. Because sometimes your comic side is at odds with your movie side. I struggle to keep them in check. To hell with the gender-swap, Benning does real good here!

I'd say the two big things that keep this from making me roll on the ground crying is the pacing and the feeling I got that reminded me that I was watching just another origin story. Only at times, though, but I still felt it. Perhaps each new character needs to show up in someone else's movie, it was fun getting to just jump right into "Black Panther" and "Wonder Woman" since they were both introduced in other movies. But then, would that take away from those introductory movies themselves? Its tough terrain these days, because we've seen so many variations of heroes, that the general audience is starting to get how each hero is alike and how they are not. Which means these origin stories need to be more interesting.

I do love that the movie takes place in the 1990's. The music of the 1990's is some of my favorite music on the planet. They use it to expert detail. However, jumping back in time hurts the continuity of the whole franchise. There is stuff that happens on Earth that would have been talked about in the other movies. I give the studio the benefit of the doubt, they are making all this up as they go along and I get that. But small continuity errors can make this whole thing slightly discombobulated. In "Ant-Man" it was simple to cover up what Hank Pym was doing, because all of his missions as Ant-Man were covert. Not here though, and the whole business with Fury's eye falls apart based on things he's said in other movies.

Nevermind though, the point is, besides all my nitpicks and problems, "Captain Marvel" still manages to be a fun trip to the theater. Marvel's machine isn't slowing down for anybody and still making their stories shine.

Oh, and the Marvel Studios Logo for this movie? Made my heart soar.

FINAL GRADE: B+
Posted by Shawn Hoelscher at 9:56 PM