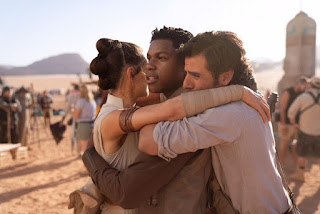 J.J. Abrams, who directed "The Force Awakens" and is now back in the director's chair for "Episode Nine" posted this lovely image of his Twitter over the weekend. Its the three new iconic faces of the "Star Wars" franchise. We see Rey, Poe and Finn all embracing, all the actors in a congratulatory hug after filming has wrapped on "Episode Nine." It is a lovely image, if I do say so myself.

So I wonder if it won't be long before we get a trailer? No to mention a title? We were supposed to get a title drop about two weeks ago, but that ended up being a rumor. There is also another rumor going around that the title for Episode Nine is going to end up being "Balance of the Force," but that sounds so apologetically cheesy that it better stay a rumor. Although I guess its not as bad as "Attack of the Clones." That was a title I initially thought was silly, but then ended up gradually growing on me. The thing I want most of all from this is just a good movie. "The Last Jedi" left such a bad taste in my mouth that I hope Abrams can just course-correct and finish this saga off strong.

That is my hope.

I can only imagine though that a trailer is right around the corner.
Posted by Shawn Hoelscher at 6:19 PM