Now here's a story too fun to pass up. 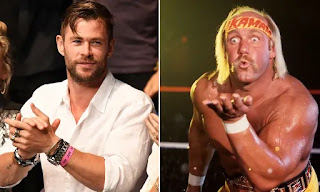 Acclaimed "Hangover" director Todd Phillips is making a biopic about Hollywood Hulk Hogan. The man who has been cast to star as Hogan is none other than the god of thunder himself, Chris Hemworth.

When I was growing up, I was a huge fan of wrestling. Huge fan. I was a Hulkamaniac. Totally and purely. Even when he turned heel in WCW and became a villain. Even when he formed the NWO. I was still a fan. He was still heroic even when he was bad. I was a fan for a very long time. I was one of those kids that was very disappointed when I found out wrestling was fake. Sometimes though, for nostalgic purposes, I will watch old matches on YouTube, laughing hysterically that I never noticed just how staged much of it really was.

Phillips' film will be about how Hogan got into the wrestling scene, but won't really dig into the controversies outside the ring regarding Hogan.

Hogan himself had some really nice things to say about Chris Hemsworth landing the role. Hemsworth will also be a producer along side typical Phillips regular Bradley Cooper.

What do you guys think about this?
Posted by Shawn Hoelscher at 9:26 PM