The Academy Awards are nearly upon us. As per most years, I play the procrastination game something fierce and I am catching up on the movies nominated for an award right now. Thankfully, I don't have too many to see, so going through them will be a piece of cake, and it should award me enough time to make my predictions after some thoughtful thinking right before Sunday.


If Beale Street Could Talk 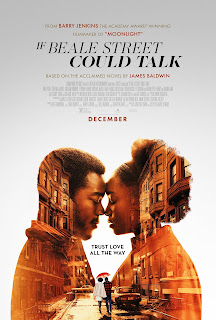 I usually can't stand movies that seem to pander to the awards season. When I originally read about "Moonlight," the 2016 movie by Barry Jenkins, it seemed like a movie specifically designed for the awards season. I was ready to write off the movie completely, until I actually saw it. I can barely describe how the movie Barry Jenkins moved me, but I find myself watching it quite a bit since its release.

While I wouldn't say that "If Beale Street Could Talk" had the same profound impact that "Moonlight" did, but it is an exceptional piece of filmmaking. A moving picture of defiance and love at a time of extreme prejudice. Regina King is very good in the movie. There is a scene in particular where she is trying to convince a woman down in South America to come back to New York City for a court hearing that is so remarkably powerful that it has left me thinking about it for the whole weekend. She could very well get the Oscar Sunday night.

Can You Ever Forgive Me? 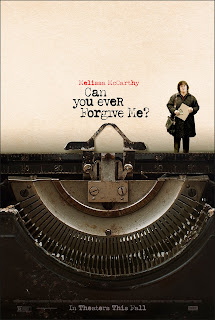 Here's a movie that I just enjoyed for start to finish. I have loved Melissa McCarthy ever since I saw her in "Bridesmaids." But I'll be honest, I've been pretty pissed off by what Hollywood has offered her as a result. Essentially allowing her to be the same person over and over again. I don't get how comedy people get type-cast, because they really are people who can do anything. Comedy has the potential to be dangerous and dark. There have been several people from comedy backgrounds who have proven to be downright scary in the right role. I've been waiting for McCarthy to get her turn.

While there is some humor in "Can You Ever Forgive Me?" its not the braindead, slapstick stuff that we usually get from McCarthy. It is more offbeat, and more dry. It is mostly a dramatic film and McCarthy is alive here in way I have not seen in quite a while. Its good stuff indeed. 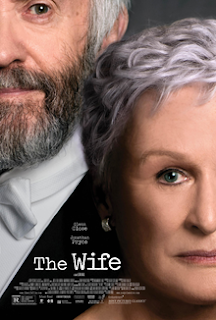 "The Wife" was ultimately a good movie, but one I felt like just got going a little too slowly. There is some dramatic play between Glenn Close and Jonathon Price that truly is magnificent. They play possibly the most dysfunctional couple I have seen in any movie in a long time. There is a moment where they are arguing over possible unfaithfulness in their relationship, then when their daughter calls them after giving birth to her first son, the couple turns on a dime. They pull it together and find rejoice and love in the tender moment of becoming grandparents. It's actually borderline scary how the scene works. While Close and Price send off fireworks, it ultimately didn't save the movie and promote it to great status, for me anyway. But it might be just enough that Close gets the Oscar. We'll see.

I'll be dropping more hints as the week progresses. And as always, I'll post my predictions this weekend.