Reaction to the 76th Annual Golden Globe awards- AKA "Tag" 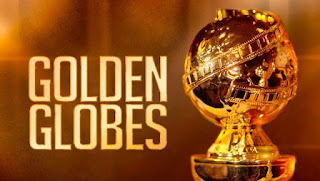 I did check out the 76th Annual Golden Globe Awards. I like seeing this precursor to the rest of the awards circuit. Although just because someone wins tonight doesn't mean they will win the Oscar next month. I like the Golden Globes because of how laid-back it is. I also like that they seem to go after who deserves to win, instead of picking a winner out of campaigns and social issues. That's at least how I see it.

I have to say though, year after year, these award shows are floundering in bad hosts. I like Andy Samberg, I'm a huge fan of "Brooklyn Nine-Nine." I've also liked Sandra Oh quite a bit in things I've seen her in. With that said, they totally failed as hosts. They were completely not funny, awkward onstage and made the start to the ceremony incredibly slow. I am thinking that from now on Tina Fey and Amy Poehler should be the exclusive hosts to the Golden Globes. And The Academy should just alternate Billy Crystal and Ellen DeGeneres and Jimmy Kimmel for the Oscars. Unless they can pull a miracle and get Seth McFarlane interested again. I will say that I was a little touched by Sandra Oh's discussion on how well the business has changed. I never would have guessed that "Black Panther" and "Crazy Rich Asians" would be recognized in the same ceremony, but sometimes things do change for the better.

Despite the so-so hosting, I did like that "The Kominsky Method," one of my favorite TV shows of 2018, won a few globes. I loved that "Roma" won some globes. I enjoyed watching Christian Bale win for his work in "Vice" and his acceptance speech had some sprinkled in humor. I am still working my way through "The Americans" so I haven't seen it all yet, but I am glad it won big for its last season. I haven't seen "The Wife" or "The Favourite" yet. But its pretty early in the Awards circuit and I usually haven't seen them all yet, but I am eagerly waiting to check them out. I will say that I was really surprised by all the wins of "Bohemian Rhapsody" and "Green Books." Both are fine films, but not Best-Of-Year worthy by any measurement. "Bohemian Rhapsody" is nowhere close to the best drama of last year.

My favorite moment of the night by far was Jeff Bridges getting the Cecile B. DeMille Award. And his jibberish speech was exactly what I expected from him.

Goofiest acceptance speech I've ever seen. Telling by some of the attendees who got a close-up, I wonder if they even understood what Bridges was really saying. But I like the idea of being "tagged" to make the world a better place, to make it make sense to you. Because we are alive, and nobody can take that away from us right now. So go out and make this world a better place. Is that what you were saying, Jeff? I really wished you ending things with "The Dude Abides..." Because that's what you've always done, Jeff. The Dude Abides.

What did you think of Sunday's ceremony?
Did your favorites win big?
Posted by Shawn Hoelscher at 6:44 PM