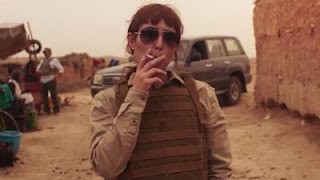 There was a joke on a meme I read last year that the month of January is the Monday of months. A truer statement couldn't have been said. Its the month right after the holidays. There isn't anything special happening in the month and if you like me, living in the midwest, its fucking cold outside. This winter in particular is snowy, icy and bitterly cold. Its also fills my heart with sorrow knowing that my daughter didn't get any snow on her first Christmas, but is now getting by the pound after the holidays. After the holidays, what is the point of all the snow.

January is a slow month for movies. I'm catching up on some Oscar hopefuls, which is per usual this time of year. Usually, the studios will dump a bunch of crap on this month, which makes me dread going to the theater. I know M. Night Shyamalan's new movie has people divided, but hey, what Shyamalan movie hasn't divided viewers? I guess at the very least, we have something to talk about. More than we usually get this time of year. I've seen a couple new Netflix originals. I am still mostly at home due my daughter, the cutest little dictator you ever did see. I wouldn't have it any other way though, I love being a dad and I love her. The Netflix originals I've seen are "IO" and "Close." "IO" stars Anthony Mackie as one of the last people on Earth and is trying to find a way to get up to space on the Saturn moon IO with all the other humans, and of course is struggling. Its pretty good, but pretty bland, dry, and unexciting experience. But it does avoid some of the cliches of that type of movie, which was welcoming to say the least. The other movie is "Close," in which Noomi Rapace has to protect the daughter of a socialite in the Middle East. Things get bad, some bad guys want to kidnap the daughter for ransom, and so Rapace kicks some ass. Even though she's done mostly blockbuster mainstream stuff so far, I never would have pegged Rapace as an action hero. But the movie itself is pretty by-the-numbers.

In this slow week, I've been working on some stuff that I will eventually publish here on the blog. I am currently building a 1000 Best Movies List. Yes, you read that number correctly. So I've been hard at work re-watching favorites and trying to figure out which movies even qualify. I have no idea when the list will be ready, but I do plan to publish it. Even if it is a year from now. I promise it will be worth the wait. Taking some days to watch movies new and old, it lead me to another idea I've been throwing around in my head for a few months now. It involves you, the readers. It is going to be a surprise, but an announcement is coming. It will have to do with older titles. Which I am excited for. I love all movies. And I think I've let my blog become just another old movie site, when I've wanted a space to discuss it all, because I think it all matters. So I want it to be fun for everyone. More on that soon.

Hope you are all enjoying your post-holiday lives and that you haven't broken any resolutions just yet.
Posted by Shawn Hoelscher at 6:28 PM