A First Look at the "Spider-Man: Far From Home" trailer 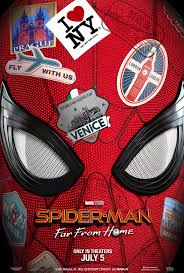 After the character finally showing up in the Marvel Cinematic Universe in "Captain America: Civil War" to his own solo adventure within the Marvel Cinematic Universe in "Spider-Man: Homecoming" to showing up in "Avengers: Infinity War," then getting a Sony-led "Into The Spider-Verse" we've had lots of Spider-Man in the theaters lately. I hope none of you are spidey-ed out yet because the next solo MCU adventure is coming this July.

Wait...what? Didn't Spider-Man turn to dust when Thanos snapped his fingers? Yes, it looks Marvel just spoiled one of their own movies. But hey, if you know the comics, you knew anybody who died-by-cropdust in "Infinity War" wasn't going to stay dead. If you don't know the comics, well, did you honestly think the likes of Spider-Man and Black Panther and Doctor Strange were going to stay dead after one movie? Of course they weren't.

Marvel has confirmed that this movie takes place after "Avengers: Endgame," and it looks like the world in "Spider-Man: Far From Home" looks about the same as the pre-Infinity War world, so I guess whatever the heroes had to do to reverse the snap went on without a hitch! Aunt May, MJ, Flash Thompson and Happy Hogan all seem okay and Nick Fury is doing well too. In fact, he's back into spy mode, recruiting Spider-Man for a mission in Europe while he's there on a school vacation.

And it looks like longtime Spider-Man villain Mysterio shows up, played by Jake Gyllenhaal. Fun fact, Tobey McGuire almost bowed out of "Spider-Man 2" when he had back problems, and Gyllenhaal was talked about being cast and replacing Tobey if he did drop out, which of course didn't come to pass. But now Gyllenhaal is playing Mysterio, and it looks like he will be teaming up with Spider-Man? I am sure that will only last until the climax of the movie, or maybe they'll set him up for a future villain. Fury will recruit Mysterio and Spider-Man to battle The Elementals, a group of people who each have power over one...you guessed it...elemental.

While I am a little disappointed that we aren't getting any more classic Spider-Man villains, this does look like another fun entry.