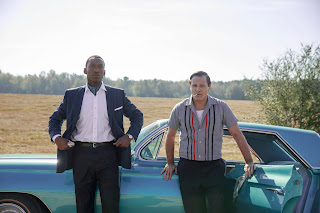 Before 2018 had started, I was seriously wondering what had happened to Viggo Mortensen. Did the Ranger from the North decide to be King of Gondor full time? Then in 2018, I saw that he was going to star in "Green Book," with none other than Mahershala Ali. It was going to be a true story about "Doc" Don Shirely, one of the best piano players of his time, hires a roughneck Italian Tony Vallelongia (Mortensen) to be his driver and protection as he went on tour in the Deep South of the 1960s. What begins as a shaky relationship becomes one of mutual respect and friendship.

Its of no surprise that both Mortensen and Ali are both electrifying in this. If you need any reason at all, its to watch both actors bounce off of each other. Mortensen in particular seems to disappear into the role of Tony Vallelongia, also known as Tony Lip. And who is Tony Lip? He's a hardened New Yorker, you kind of bounces from job to job, street hustle to street hustle, only to provide for his family. Whether its bouncing at a New York club or making fifty bucks eating hot dogs faster than the local fat guy, he will do whatever to make ends meet. Because of the time, its no doubt that Lip is a little racist, and comes from a racist neighborhood. One morning, when Tony wakes up, a huge group of friends are in his house to "protect" his wife from two black men working in their kitchen. Tony's wife offers them lemonade, after the men leave, he throws the cup in the garbage.

It's through sheer surprise when Tony is contacted by Doc Shirley for an opportunity of a lifetime. To travel with him on tour, being his driver and protector, making tons of money along the way for his family. At first, Tony is hesitant, because its not your normal driver gig, and Doc isn't your normal customer. But eventually, as these movies often go, Tony accepts the job with Doc and they begin their travels. All of the hints of Tony's apparent racism vanish without a trace. Its like he gets over his racism sometime off-screen. The rest of the movie he's happy to joke and act friendly toward Doc, even though we see his apparent mistrust of black people in the opening moments of the movie.

Its kind of odd, but there were a few things that were odd about the movie. Why is the movie called "Green Book" you are probably wondering? Tony is given a green book featuring all the hotels Doc will be accepted because of his race. Though it seems like we barely see it throughout the entire movie. It sort of comes off as an odd McGuffin, but perhaps not even that. You would think since the movie is called "Green Book" that the green book itself would have more significance. It doesn't, the significant thing is the relationship that forms between Tony and Doc. So why not entitle the movie "Tony and Doc?"

Perhaps I shouldn't ask such questions. There is lots of vibrant music and atmosphere in the movie. The look of the 1960's seems very grounded and well done. But like I said, the reason to see the movie is for Mortensen and Ali. Mortensen in particular hasn't been this good in years. He would mistake him for an Italian if you didn't know better. And with the weight he gained for the role, he lumbers around looking like William Forsythe. As far as "racism in the South" movies go, nothing much will surprise you here. A lot of these movies feel like they were built from a kit, and there is much predictability here. But its still a fun watch that I bet you will all enjoy.

FINAL GRADE: B
Posted by Shawn Hoelscher at 8:23 AM