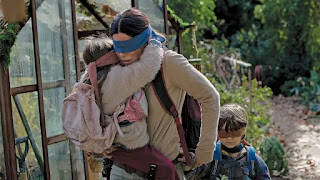 Sometimes a movie is affected by the recent release of a similar movie. We've seen it happen time and time again in this business. If you have watched Netflix's "Bird Box," the new thriller fresh out at the start of the weekend, you no doubt got "A Quiet Place" vibes from it. As well as maybe some "The Happening" vibes, the 2008 thriller from M. Night Shyamalan. If I had to describe "Bird Box," I'd say it was "A Quiet Place" mixed with "The Happening." In "A Quiet Place," we see a family living in a post-apocalyptic world, talking only in sign language. For the rest of the movie, the audience has to figure out why. "Bird Box" almost feels like one of those low-rent, knock-off movies that gets made months later by the SyFy channel. The movie also deals in a post-apocalyptic landscape, but this time, everyone is blindfolded, and the audience needs to find out why!

The thing is, "Bird Box" definitely doesn't have the SyFy channel budget. The visuals are actually pretty good here. The film also boosts itself with an all-star cast. Not only do we follow Sandra Bullock into this world, but she throws herself at the role with a sheer ferocity. Bullock was also executive producer on this movie, and I also happen to know that this film was based on a book. There was something about this story that obviously inspired Bullock, and I was curious to see what that was. She leads an all-star cast including Sarah Paulson, John Malkovich, Trevante Rhodes, Tom Hollander, Jackie Weaver, and even the Eminem feuder himself, Machine Gun Kelly. This is a very well acted movie, and I plan to get into specifics here in just a bit. But there is much here that works.

When similar movies come out only a mere ten or so months apart, its tough not to play the comparison game. And I hate to say that the tension created by John Krasinski in "A Quiet Place" was so profoundly powerful, and there isn't a single scene that holds a candle to anything Krasinski did in "Bird Box." In fact, there is lots of pedestrian tension in some parts of the movie. There is a "been there, done that" quality to much of the structure of the movie. I am curious to actually read the book now, because it seems like the author, or maybe just the film's screenwriter, saw lots of horror movies. This feels like a homage showcase at times. There is a scene reminiscent of "The Mist," one reminiscent of "Mad Max." Hell, at one point, there is a moment that channels "Deliverance." I've seen all of those movies, and any time I sit down to watch a new thriller or a new horror movie, I don't want to see things I've seen already. A new twist is always a key.

"Bird Box" certainly starts off well. But after so many great examples of our world suddenly going to hell already out there, its tough to get that kind of material wrong. Sandra Bullock's Malorie and Sarah Paulson's Jessica are in a car, suddenly people just start killing themselves. They hear earlier in the movie that this is happening across the globe, without a single explanation why. They begin to realize that having your eyes open outside is making people go mad. Is it a biological weapon? Something supernatural? No exact answer is given, sure some hellish lip service is made, but no real explanation. I get these movies are ambiguous sometimes, but I'd absolutely love for a movie with a high-concept like this to really explain what is wrong. Characters like Freddy Kreuger, Jason Voorhees, Chucky and Pennywise are alive and well in our pop culture canon because they became full-fledged characters. All we know in "Bird Box" is there is some kind of evil force that messing with people's minds, forcing them to kill themselves. If you close your eyes and board up your windows, you'll be okay. But no source is explained for this haunting.

Malorie eventually seeks refuge in the home of Douglas (Malkovich) who he unwillingly allows to become a safe haven for survivors. The rest of the movie is a typical survival movie. There is talk of rationing food here, there is a daring mission to get more supplies here. And does a character let somebody else from the outside world in to reek havoc on the survivors in Douglas' home? Don't make me laugh. "Bird Box" kind of slips off of the audience because its so painfully familiar in parts. Not to say all of it is wrong. Because its not. The stranger one character sadly lets into the home is a mental patient named Gary. Played by the great villain actor Tom Hollander. Seriously, his entire stretch of the movie set me on edge, and it just goes to show how committed to villain material this guys is. Malkovich is Malkovich. I'm also going to tell you...if you don't know Trevante Rhodes yet, you will. Trust me you will. He's got a LONG career ahead of him and we will all be richer for it.

We are living in a time where brands rule all, so when people take a chance on something that feels more original, you want those movies to work so badly. "Bird Box'' definitely comes close, but I really wanted more. Its well acted, and at times, its every bit the movie its trying so hard to be. In fact, it feels disjointed between the good work and bad work and it feels like a great movie kind of just got away from them. Still, it feels like Netflix is changing, and I hope they continue to release ambitious, challenging work like what we see here.

FINAL GRADE: B-
Posted by Shawn Hoelscher at 6:49 PM