Review: "The Kindergarten Teacher" is a disturbing, strange movie 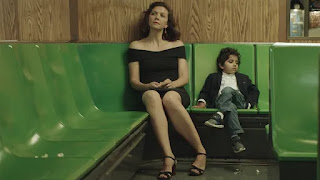 When Maggie Gyllenhaal isn't working on commercial fair, she's one of our most reliable independent film stars. Much like her brother, she seems to be typecast almost. I don't know what it is about Gyllenhal and what draws her to such slutty characters, but she sure has played lots of them over the years. Its not a good thing or a bad thing, but it is just a thing. When you see her in "The Kindergarten Teacher," you will think for a little while that she's playing a typical teacher. But of course, there comes a moment when her character cheats on her husband with her college professor, a fact I welcomed with a bitter laugh.

"The Kindergarten Teacher" is a really weird film, so weird that its actually off-putting. There is a disturbing cloud that hangs over the whole film. I can do disturbing, and I like disturbing when its examining something worthwhile. "The Kindergarten Teacher" is just disturbing without reason, a creepy experience without anything serious or worthwhile to say about its creepiness. At one point you will think that the film is about one thing, then it takes a hard, drastic turn in another direction. It almost feels like a cop-out ending, simply because the main relationship of the movie is hardly explained in those final moments that it really couldn't feel like anything else.

For much of the film, Gyllenhaal plays Lisa. A kindergarten teacher who isn't fulfilled by her life. She wants to write but can't seem to produce anything provocative enough to write. She attends a poem class, but still never gets the most out of it. Then, she reads some poetry from one of her kindergarteners. Its wise beyond its years, mature in a way that even some of the most credible published writers couldn't pull off. This little boy, played by Parker Sevak in what I presume is a first time role, is Jimmy Roy. Gyllenhaal sees so much potential in him that she wants his voice to heard in some semi-professional poetry competitions.

You think that the movie is going to be this uplifting, tear-jerking, wise movie. Honestly, I would have preferred that. Lisa gets so fucking weird that it suddenly feels like a different movie. How weird? How about taking Jimmy Roy to poetry competitions without her parents' concent, basically kidnapping him? How about cheating on her loving husband for seemingly no reason with her poetry professor? How about taking Jimmy Roy's work to her class, passing it off as her own to impress her professor? Like I said things weird in a hurry.

Maybe the movie is about Lisa's emptiness, and how it effects the life of this poor, young kid. I would have bought that a little bit better had the movie had something profound or even something at all to say about it. The movie seems to shift out of the film's convenience and not due to something like character development. There isn't enough evidence in the movie to highlight why suddenly Lisa would turn to a life of crime simply because she's unfulfilled with her life plans. Life hasn't given me everything I've wanted, and I've never decided to kidnap children because of it.

I think "The Kindergarten Teacher" will end up being remembered as a film that was trying to be a lot smarter and more relevant than it actually was, and depending on how much you love your Netflix app, will probably be forgotten by viewers quicker than most.