So, about that Boba Fett movie... 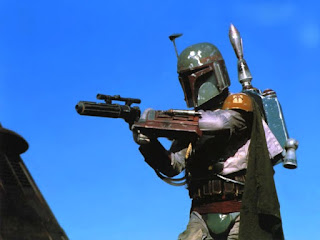 When Disney bought Lucasfilm, they began to plan movies for the foreseeable future. I am not even exaggerating. Disney has a movie planned in the Star Wars universe for as long as you can count. The franchise isn't going anywhere and it will be interesting to see where the franchise goes after all the Skywalker stuff is done. One of those avenues was possibly making a Boba Fett anthology movie, in the same vein as "Solo" and "Rogue One."

The other night, Star Wars producer Kathleen Kennedy confirmed that a "Boba Fett" movie is actually not happening.

There have always been some fan theories that Boba Fett escaped from the mouth in the desert after the events of "Return of the Jedi." But I guess that theory will remain a theory. It's not happening.

What WILL be happening though, is that we are getting a show on Disney Play, the upcoming streaming service Disney will be releasing next year. The show will be run by "Iron Man" director John Favreau. It will simply be called "The Mandalorian" which is the race of bounty hunters that Boba Fett belongs to.

I love Boba Fett as a character, and I love that Favreau is getting a TV show in the "Star Wars" universe. But I am pretty sure that the streaming service bubble is about to burst. Does anybody want to shell out another $5.99/month for another streaming service? Or is having everything Disney under one banner too much to pass up?