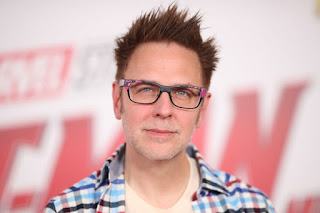 James Gunn has been a subject of interest in Hollywood since summer. He was abruptly fired from Disney and Marvel over ten year old Tweets which centered around rape and pedophilia. Before you get outraged all over again, let me tell you that these Tweets were brought up before "Guardians of the Galaxy" starting shooting in 2014. He apologized for them. He recognized that the Tweets were in bad taste and that he's matured in ten years, as do most people. Still, pressure from Conservatives led to his release from Marvel.

Bad move, Marvel. Bad move. Now we know why, DC has scooped up Gunn. At first, it was said he would direct and write. It has since been confirmed that he will definitely write "Suicide Squad 2." Which honestly seems like a perfect fit for Gunn. It also looks like we will be getting a pretty decent "Suicide Squad" movie, especially if Gunn ends up directing this thing.

I ain't gonna make this a political screed, because that just isn't my style. But man, Marvel. BAD MOVE. I can't wait to see what Gunn brings to this table. I hope and pray that DC realizes who they have and they allow Gunn the freedom to tell the story he wants to tell. DC has been putting shackles on many of their filmmakers, which has lead to bad word-of-mouth and modest (at best) box office returns. Allow Gunn to hit this one in the face!

I can't wait to buy this soundtrack!

Oh and if Dave Bautista gets cast in this, please let him play King Shark!