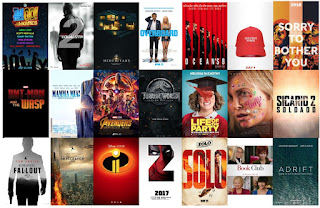 There has been something special about summer movies ever since the 1970s. The summer movie season has become an event. How hard can the studios entertain the audiences? It seems that has been the ultimate dare from studio to studio. Why not? The schools are out, people are planning vacations, the mindset is ultimately relaxation, or at least, as relaxed as you can get being a working American these days. I've always loved the summer movie season and I am always curious to see what the studios cook up while I enjoy much needed free air conditioning.

This summer though, everything changed for me. My wife and I brought home our first baby girl. This summer has been the best summer of my life because of it, and I hardly got a chance to step into a movie theater. There were some things I missed this summer. I missed "Mile 22" and "Slender Man" and "Mamma Mia 2" and "Adrift" and "Alpha." There were some big independent market movies like "Sorry To Bother You" and "Blackkklansman" that I've missed too. But that's okay, there will be plenty of time to catch up on all of those. Based upon what I did end up seeing though, I can say that summer 2018 was overall good.

There were a couple surprises like "Ocean's 8," simply because I didn't expect to like that movie. There was once again, a great superhero output. I hope you are all caught up on your Marvel movies, because 2019 is going to be a big year. No matter which comic company you prefer. The independent films I did see, "Book Club" and "Tully," were both good movies, but nothing I'd call great. But that didn't matter. We had "Mission: Impossible" and "Incredibles II" and sequels we didn't ask for, but ended up being fun in the first place.

The biggest error for me was "Jurassic World: Fallen Kingdom." It was just a mere retread disguised as a new sequel. Nothing new or invigorating. Just the same old stuff we've come to know from the franchise. But in a summer movie season, one reason to be disappointed is a good thing. There were plenty of other surprises, but those surprises were good. That is the most I can ask for in a summer movie season.

While I didn't review it on my site, the last real summer movie I saw was "Crazy Rich Asians." Which was wildly entertaining. Is it predictable? Absolutely. But I think its predictable by design. There was no other way. The movie bends over backwards to entertain though. There are many funny moments and the cast is spot on every turn. I think Constance Wu is poised to become a big star and she certainly deserves it.

For all that I missed, I hope you all enjoyed it, I will do my best to catch up with everything. After its all said and done, I think summer 2018 ended up being a good one. There is absolutely nothing wrong with a good summer movie season in my book. As the weather begins to chill and the leaves begin to change, I will forever cherish the moments made here, as I always have.
Posted by Shawn Hoelscher at 8:39 PM