Review: "BlackKklansman" is the film to beat this year. 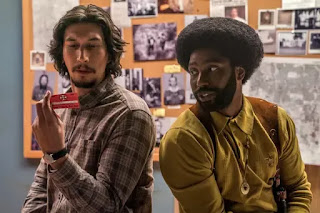 I've never been a very political person, and I've tried to keep political talk minimal at worst, and totally non-existent at best. But man, in this day and age, that seems like an impossible task. Everything is political these days. Things that have no business being political are precisely political these days. Sometimes it seems like our country is ready to implode, and good lord does that scare me. It doesn't help my fear center knowing that my wife and I just brought a lovely child into this world, and I am already having some fits of anxiety wondering just how much this world is going to change as she gets older. I mean, damn, she already was born during a time when a reality star became president.

Now look. Yes, I was disappointed by the election results back in 2016. I didn't vote for Trump, but lets admit that Decision 2016 was just a shitshow all around. Even though I don't agree with much of what he does, I do find it a little fascinating that somebody with no government or military experience just kind of waltzed into the presidency. I don't think Trump is the Anti-Christ, I think he's a baffoon that got into his dream job somehow and now doesn't know what to do. At the same time, I am not sure I want him impeached, because Pence actually scares me more than Trump does.

One thing is for certain though, some of our very best talents have woken up during this period, and they are delivering some of their very best work. Some say that "BlackKklansman" is a wake up call for Spike Lee. To me, that's a really unfair. Lee has been on par with his best early work in 2015 with the remarkable "Chi-raq." A movie I missed in 2015, but which blew me away completely once I finally caught up with it. "The 25th Hour" was 2002. Bamboozled was 2000. Sure, he's made some crap in between there, the hits he makes are so precise that I can forgive him for a bad movie every once in awhile. Same with every director in the business. I hope this is all saying something too, because sometimes I am not so sure Spike Lee likes the whole white race.

"BlackKklansman" is a film that is based on a true story. It's so freaking strange that you aren't going to believe its real, but apparently is real. Ron Stallworth was the first African American police officer in Colorado Springs. He was hired in the early 1970's. He jumps around from department to department, hearing racial slurs while he does, goes undercover to a Black Panther Party only to end up in the intelligence division. To kill time one day, he calls the local Ku Klux Klan chapter, pretending to be a white person. What starts as a seeming prank, ends with Stallworth recruiting Jewish Officer Zimmerman to pretend to be him in the flesh. Stallworth and Zimmerman begin to infiltrate the KKK, and eventually learn of a possible attack.

Again, it doesn't sound real, but somehow it is. The movie that ensues is something that a wicked sense of humor, but also takes a real stand. Spike Lee has always been righteously angry, in cases both deserved and undeserved. Here, this is righteousness I can get behind. It helps when Lee adds some of the best humor in any of his films since "Do The Right Thing." It helps that he has put together one of the best acting ensembles he has ever had. John David Washington may not be a name that jumps out at you yet. In fact, if you've never seen HBO's "Ballers," you've probably never seen the guy. That will change as of 2018. He is getting on next years' Oscar ballot. I can't fathom how he won't. Washington plays Stallworth with an absolute perfection of the craft. I don't know if I have anything else to say about Adam Driver, the guy is just amazing, and he plays Zimmerman here. You may remember Laura Herrier from "Spider-Man: Homecoming," and she's great here as Stallworth's girlfriend. Topher Grace plays David Duke, the David Duke. Grace is really good at playing these low-key assholes, and he does a miraculous job here. Also look for Alec Baldwin in the early moments of the movie, giving us one of the film's biggest laughs.

There is a big difference between making something look like a particular time and making your film look like a community theater presentation. The small details DO matter in a movie, at least to me anyway. Spike Lee went all out with a crew of amazing individuals, and the costumes, the places and the general attitude of the film feels like the 1970's. There is a genuine realism to each and every scene that only added to the film's craft. I love it when history movies feel like time machines and not actual movies. While there is a comedic style to the film, its also amazing just how lived in this world feels.

The film ends with various footage of the Charlottesville protests, and while that may seem like a random thing to put into the final reel, it actually makes striking sense. I don't think it was an accident that this film's release date was the one-year anniversary of the protests. I think Lee is saying, loud and clear, that no matter how many steps forward we make, we then take just as many steps backward. No matter how well renowned we are as a nation, its still taken us hundreds of years to solve the race issue in this country. Worst yet? We still haven't answered it. While "BlackKklansman" is a funny movie, and certainly brings the entertainment factor. It also cut deep in a very meaningful way.

FINAL GRADE: A+
Posted by Shawn Hoelscher at 7:01 PM