When the second half of "IT" comes out next year, I truly hope that everyone who liked the first half will truly see what a fascinating story it is. I would never argue against someone who didn't like or didn't see the appeal in Stephen King. Because he isn't like anybody else in horror. If he was, he probably wouldn't be the writer he is today and would not have seen so much success. I think it takes someone truly remarkable and truly talented make room for themselves inside an entire genre. But yes its true, nobody does it like King. I think there is a bigger audience for him than I thought. "IT" was treated like a wee experimented and ended up being a huge commercial blockbuster as far as horror films are concerned.

Anybody who saw "IT" last year will remember this scene. Its when Eddie Kasbrack got traumatized by a leper and Pennywise first confronted him. Pennywise, played by Bill Skarsgaard is having some fun with the director Andy Muschietti. 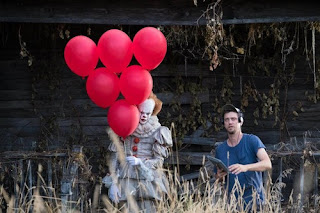 Posted by Shawn Hoelscher at 6:48 PM