The Behind-The-Scenes-Pic of the Day says "Free us or die!

So in my four and five year old mind, "Return of the Jedi" was my favorite "Star Wars" movie. Yes, I know, that's heresy to say. I get it. My tastes have matured since then and I've come to appreciate "A New Hope" and especially "Empire" (which I would say is the quintessential Star Wars film), but for awhile, I loved Jedi the most. I can't even fathom why. I guess I thought the whole Jabba's Palace detour was cool and I liked the final battle. Yes, even those goddamn Ewoks.

One thing that I can't stand about the entire "Star Wars" franchise is how it introduces badass characters, then decides to kill them easy. Take Boba Fett for example. He had the coolest costume in the old trilogy. He had that silent "Don't Fuck With Me" attitude. He never said much, but you could just tell by looking at him that he was dangerous. That voice was stark and cold when he did speak, and it was borderline nightmarish. But in the skirmish at Jabba's palace, his jetpack malfunctions and he dies? That seemed almsot like a cheat. George Lucas did the same thing to Darth Maul and General Grevious and I never got over it. 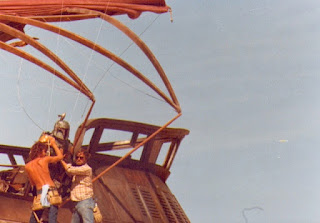 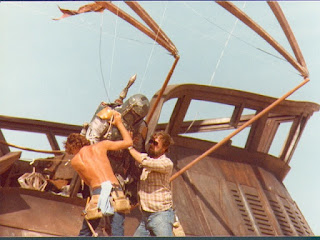 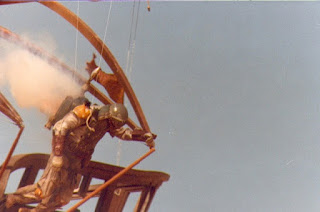 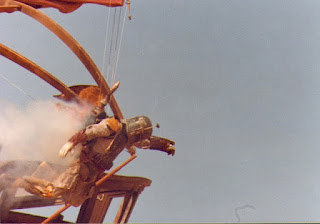 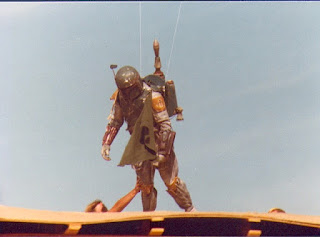 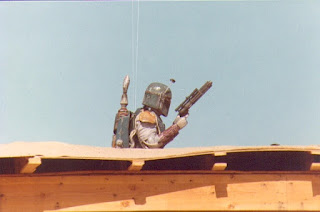 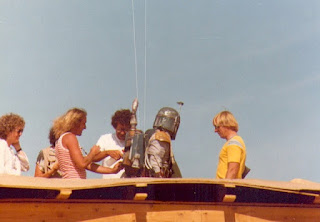 Even Boba Fett didn't do much since his introduction, he is still revered as one of the coolest and most popular characters in the franchise. Heck, even though he suffered from a wimpy exit, I still think he's cool. Here are some behind the scenes pictures of Boba Fett in action. Right when he was about to biff it with his jetpack
Posted by Shawn Hoelscher at 9:15 PM