Behind-The-Scenes Pic of the Day says...so it begins

When "Star Wars" came out in 1977, I was not alive. I wasn't around again for "Empire" or even "Jedi." I wasn't alive for most of the "Back To The Future's" or "The Godfather's." For most of my life I missed out on some of the big franchises that are still talked about today. Easily, the biggest franchise that I ever lived through was "The Lord of the Rings." That franchise was my "Star Wars." The modern film franchise that really got me thinking just how big of a movie geek I truly am. For some reason, as I watch "Disenchantment" on Netflix tonight, it made me think of "Lord of the Rings." It is, after all, a goofy fantasy world show brought to you by the guy that gave us "The Simpsons" and he may have another hit on his hands. But that's for another day to discuss.

One of the most iconic moments in the entirety of the "Lord of the Rings" franchise was the Battle of Helm's Deep from "The Two Towers." Looking at today's behind-the-scenes-pic, I would have never guessed that the castle itself was a model. I figured it was CGI or something. Man, peeking behind the corner can be so much fun. The castle itself is so convincing to look at. 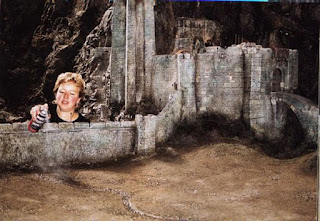 Posted by Shawn Hoelscher at 8:11 PM