It's been awhile, folks!

As you all know I've been busy at work helping my wife raise a baby. Our new daughter is cute as a button, strong for her age, and is merrily healthy. But I'd be lying if she isn't a handful sometimes. She's still a baby, and baby's cry, thankfully our daughter only gets upset when she needs something. Though playing the guessing game of what she needs can be slightly tough sometimes. Still, she's been worth every minute, and we couldn't be happier.

In the meantime, its been tough getting out to the theater to see new movies. So I've been catching up on some stuff that I missed in theaters this week. I rented and watched Steven Soderbergh's "Unsane" and Clint Eastwood's "15:17 To Paris." I've loved and admired both directors ever since I was a movie fan and I was curious about their efforts this time. Soderbergh's "Unsane" follows Sawyer (Claire Foy of "The Crown" which I haven't watched yet.) who moved from her home state to evade a stalker. When she feels she sees the stalker again, she goes to see a councilor about it, and without much effort, the councilor admits Sawyer into a psyche ward. The psyche ward isn't what it seems and even scarier, the stalker is now employed at the same ward. Then, Eastwood's "15:17 To Paris" tells the true story about the 2015 Thalys Train Attack, and how three brave heroes apprehended a terrorist before they could do any damage.

I wish I could say both films are built to last. Soderbergh and Eastwood have made some marvelous films and they are some of the most reliable filmmakers in the business right now, but I guess 2018 they both were on the struggle bus. Both films aren't terrible films, these aren't crimes against celluloid. For Soderbergh to just make an ordinary thriller out a "sane-person-in-psyche-ward" movie is a little frustrating. The film is a bagful of cliches and then its over. You can pretty much telegraph the whole thing from beginning to end. I think there's a great movie stuck somewhere in a psyche ward purposefully admitting healthy people for their insurance claims, and a stalker taking up employment to get to an old flame. But the way the films plays out only makes it all boring and familiar. Foy does what she can, and sadly its a thankless role. It's also pretty cool that Soderbergh shot the entire film using an IPhone. It gives the film a ruggedly realistic look. But ultimately, the film is mediocre, something I never thought Soderbergh to be. 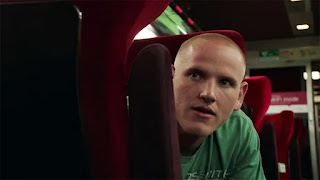 Clint Eastwood hasn't made a tense movie since "Gran Torino." If you remember when I reviewed "Sully" a few years ago, I wrote about how the movie featured the least compelling, least thrilling plane crash ever, and the court case that followed was the least emotional-driven court case I'v ever seen in a film. Sadly, Eastwood repeats himself again here. Once Spencer Stone, Anthony Sadler and Alek Skarlatos apprehend the terrorist on the train to Paris, its so painfully anti-climatic that I wanted to cry. It doesn't help that Stone, Sadler and Skarlatos are all playing themselves here. These guys are heroes, no doubt about it. But they stink as actors, even though they are essentially playing themselves. They are awkward delivering a script and blocking for their scenes. Movies and real life are not the same thing. "15:19 To Paris" suffers from the same problem "Act of Valor" did when the film used real Navy Seals. Just because your making a movie about someone who was actually at an event, doesn't mean the movie is going to be good. Mix that with the style of tension-less filmmaking by Eastwood, and you've got a fairly vapid experience.

Like I originally said, I will write as often as I can, and maybe some weeks will be me catching up on things I missed in the theater this year. I will still try to deliver content when I can. But sometimes I may write these smaller recaps.

Posted by Shawn Hoelscher at 12:35 PM