The First Ever Behind The Scenes Pick of the Day

Okay, so starting something new.

A website I used to frequent was called Aintitcoolnews.com. It was a great website that taught me that you don't have to have a four year journalism degree to get your writing skills sharp and to write about movies. It was one of the websites that inspired me to create a website of my own. Sadly, its founded got caught up in sexual allegations, and lots of his writers left. One of those writers used to post a Behind The Scenes Pic of the Day. He'd talk about the movie in question, talk about the scene, show something funny or smile-worthy. They were usually pretty quick reads, but it got the audience talking and reminiscing about the movie in question.

That what I hope to do here. In honor of Quint from Aintitcool. I am going to post a Behind The Scenes Picture of the day. Hopefully it leads to greater conversation about the said movie.

There is going to be a special theme for today's first picture of the day. As well as the coming days this week. Because this week features as series of anniversary's regarding films about one of my favorite characters. I am talking, of course, about Batman. The first Batman movie I ever saw was the original "Batman." When I first saw it, I actually got pretty freaked out by Jack Nicholson's portrayal of The Joker. I know that's probably weird to read in a post-Ledger society, but I have to be honest. I actually didn't watch the movie for a very long time because he freaked me out so much.

I eventually got over my fear. Because watching as I got older. Despite being grittier and darker, there are actually some very comic book-like features to it that I really dig. And some of it is just plain silly. All the Prince music, Joker breaking into a museum and messing up art, that big pistol gun of his. There is some genuine weirdness in the movie, but hey what else do you expect from a Tim Burton movie?

Speaking of which, I thought Burton directed the film. Not Michael Keaton. 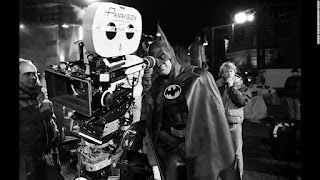 Yep. That's Micheal Keaton in the batsuit. I suppose he was filming something special?

Anyway, tell me about your favorite Batman moments below and I hope you join us every day for this new feature.

Posted by Shawn Hoelscher at 9:29 PM