The Behind The Scenes Pic of the Day...is rising

It was EXACTLY six years ago today. The final Christopher Nolan Batman movie was released exactly six years ago today. During that time, I was an Electronics Sales Associate at Wal-Mart. When my shift was done that day, my girlfriend who is now my wife and I raced to theater to see the film. It wasn't midnight, but it was pretty close to. I had been yearning for this film for years and years. Trying frantically to figure out how Nolan would close his Batman story out. 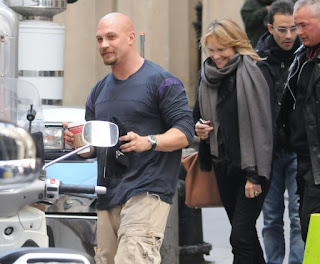 This was a photo of Tom Hardy on set. I remember when everyone saw his appearance in behind-the-scenes photos, that he was going to play Dr. Hugo Strange. A minor Batman villain, but responsible for finding out Bruce Wayne's identity and pretending to be Batman on a couple of occasions for nefarious reasons. It was quickly reported that the actor would be playing Bane, something that seemed more suitable for the actor at the time. 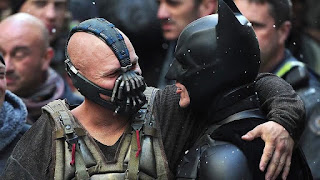 As you can see here, Bane and Batman remained mortal enemies throughout the entire shoot.

To this day, I still have a love/hate relationship with "The Dark Knight Rises." I think its filled with moments that I will remember as a film fan all of my life. But at the same time, there are things about it that just piss me off. I understand that it was a hard shoot. How do you even think about concluding a story after a shocking real-life death. We can argue until we are blue in the face what "The Dark Knight Rises" would look like if Heath Ledger were still alive. I think with what he had, Christopher Nolan did the best he could. Taken as a whole, its a good-looking trilogy. 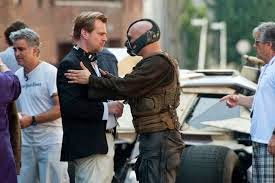 Posted by Shawn Hoelscher at 10:30 PM