I began this late, so this might seem a little stale to use right now. But hey, there is still a little time left in July. So why not use "Independence Day" for today's Behind-The-Scenes-Pic of the Day. The following pictures feature some key scenes involving some sweet hardware used by both the humans and the aliens. As you can see, lots of these scenes in the "old days" (if you can even call the 1990's the old days yet, can you? God, it fucking sounds weird.) that models were built just to be blown apart. Two of the pictures below feature the sand chase scene where a renegade alien pilot was chasing a one-liner spewing Will Smith. 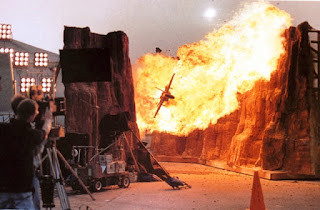 Seeing this scene in miniature form is both fascinating and shocking all at the same time.

The next pic is, I am pretty sure, from when the city destroyer hovered over Area 51 to wipe the last few humans out. At least, that's what it looks like. I do wonder in the age of CGI if the models look better or the CGI crashes with CGI fire. 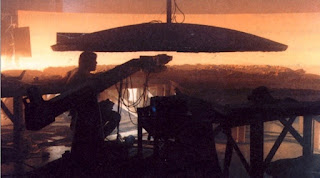 Posted by Shawn Hoelscher at 9:10 PM