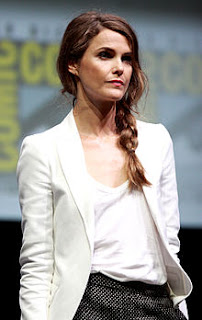 Keri Russell has worked with J.J. Abrams a couple of times. She was cast in the lead on J.J. Abrams' show "Felicity" and had a small role in his "Mission: Impossible III." She's most well known for her work on "The Americans." I've slowly begun to get into "The Americans" and I like what I've seen so far. Now, Keri Russell is apparently getting close to reteaming with Abrams for another time in the upcoming "Star Wars: Episode Nine." Abrams directed "The Force Awakens" and was a producer on "The Last Jedi." Now, he's back in the directors chair for the grand finale.

Of course its in the dark of who she is going to play. Rumors are already running rampant about who she could be playing, some guessing it could be Rey's mother. But honestly who knows? I guess that's as good a guess as any, since Kylo explicitly said she's a nobody. For me, I don't know how much I really care. "The Last Jedi" was such fumble in my eyes that I can't believe I am not that excited for Episode Nine. I will still see it, because I do want to see how this particular story ends. I know Abrams has tons of damage control to work through so that this last episode ends on a high note. So we'll see. Although this will be a good profile for Russell.
Posted by Shawn Hoelscher at 8:26 AM