Entertainment Weekly has released some pictures of the upcoming "Godzilla: King of Monsters." It is due in 2019. I am pretty sure this is intended to be a continuation of the 2014 film "Godzilla," which relaunched the franchise. As well as a continuation of the lukewarm "Kong: Skull Island" which had an after-credit scene connecting to Godzilla. The film is being made by Michael Dougherty, who made the utterly awesome "Trick Er Treat" and "Krampus."

The film will star Millie Bobby Brown from Netflix's "Stranger Things," Vera Farmiga, Bradley Whitford and Sally Hawkins, so very much like the first two films, lots of good actors. It will also, as the title would suggest, lots of monsters! Popularized by the old Godzilla movies. 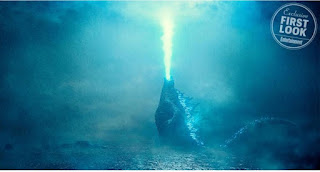 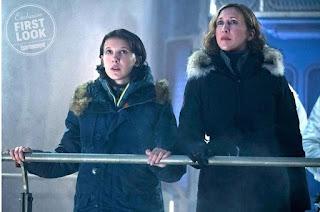