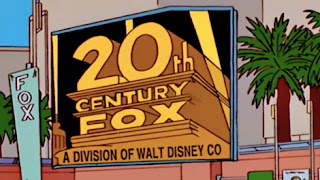 Its really beginning to get spooky how The Simpsons literally prophecies everything correctly. Forget the writings of Nostradamus, just watch The Simpsons if you want to know the future.

Alas, The Simpsons guessed correctly that Disney would eventually own 20th Century Fox. Now it does, for $71 billion, Disney has acquired several assets of Fox. Not everything, most sports and news outlets will remain at Fox. Arguably though, Disney got all the fun stuff. Rights to their movies, TV shows, and yes, rights to the Marvel characters. That was the biggest part of the news today. Disney will have acquired the X-Men and Fantastic Four properties, including all characters tied to those franchises. Finally, the Marvel Cinematic Universe is about to be complete.

It was a long, hard-fought battle, if you can even call it that. Comcast put a bid in, there was a stand-still, it took awhile. It was pretty crazy, but in the end, as always, Disney will continue its media dominance, for better or for worse.

There have been some interesting rumors popping up now. Because of the merger, and because Disney has all the Marvel characters at their disposal, there have been rumors that "X-Men: Dark Phoenix" and "New Mutants," the two upcoming X-Men movies, are now being scrapped. Other rumors say that they are going to be modified to fit the MCU mold. We will have to just wait and see, I have read that both of those movies are as bad as 2015's "Fantastic Four." So maybe its good that they are getting shelved? The fate of the current X-Men franchise will be interesting to see play out.

What do you guys think of the merger?
Posted by Shawn Hoelscher at 10:27 PM