Behind the Scenes Pic of the Day...gets a dark knight

Welcome back to the second Behind-The-Scenes-Pic of the Day.

Today marks the ten year anniversary of "The Dark Knight." Honestly, I can't believe I am writing that. I can't believe that movie is ten years old. Back in 2007 and well until its release. There was not another movie that I was more obsessed with than "The Dark Knight." I sat up at night, praying that the world wouldn't end for whatever reason. I needed to see this movie. I had been a Batman fan for a LOOONG time. The Adam West era had its place. I loved Tim Burton's movies. But once Joel Schumacker took over, it got dumb. I never thought I'd ever see a good Batman movie ever again. Then Christopher Nolan appears and brought us "Batman Begins." It represented everything I would ever want from a Batman movie. I hoped he'd go on to make nine movies. That great tease at the end of Begins showcased The Joker. 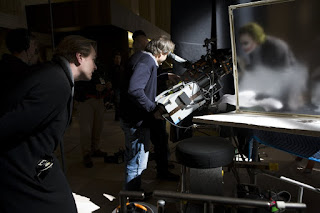 This was one of the first behind-the-scenes pictures we got and it still didn't even come close to preparing us what we were in for when Heath Ledger unleashed his Joker on us all. I would have never guessed he'd be the guy to do it. Frankly, neither did anybody else. Tons of actors wanted the role, I remember reading that Robin Williams wanted it bad. That Paul Bettany was considered. Adrien Brody and Steve Carrell were in the mix. But I was glad that Ledger gave us this, because we needed it. 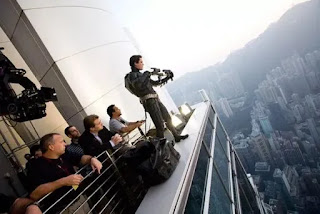 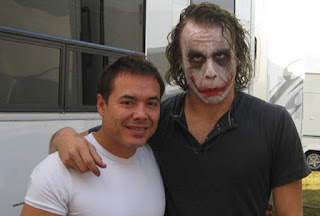 Posted by Shawn Hoelscher at 8:00 AM