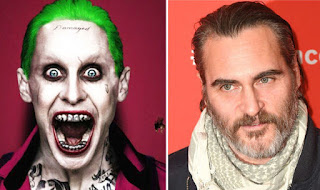 So just this past week, there has been lots of Joker news. I am talking about THE JOKER, the popular Batman villain. A few months back, I reported on a Joker origin movie. The movie was to be directed by Todd Phillips (director of The Hangover) and the crime movie god himself Martin Scorsese was going to produce the movie. The film was set to star Joaquin Phoenix as The Joker himself. Apparently, its still happening, but with a budget drop. Yesterday, it was reported that the movie will have a $55 million budget, I have no idea what the budget was before but apparently there was a drop.

I actually thought that maybe the Phoenix-Phillips-Scorsese Joker movie was kaput, since it was also reported this week that Jared Leto will be getting a solo Joker movie. The same Joker Jared Leto played in "Suicide Squad." This news is a little surprising since "Suicide Squad" became fairly unpopular and Leto's Joker was highly criticized. Now apparently he will be getting his own movie soon. No plans so far, or what it would even be about, but it is in the works.

Will our film industry get over-saturated with Joker flicks? Will these movies come out around the same time? Is Warner Brothers trying to create its own "Armageddon-Deep Impact" scenario where they are the only winner? Will anything about these movies be profitable? Well, honestly, people love The Joker so perhaps one of them will make some dough. How if at all will these movies relate back to the DCEU, and if they aren't, what's the point?

We'll see how these ideas materialize. DC and Warner Brothers are promising lots of things for a franchise that hasn't been solely popular, so I wonder what will happen here.