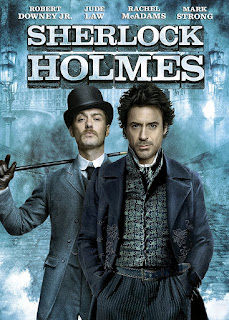 Robert Downey Jr. has been talking a "Sherlock Holmes 3" as long as he's been talking "Iron Man 4." I don't know if we'll ever see the later, but Robert Downey Jr has always been one of those actors who really listens to his fans, respects them, loves them and tries tooth and nail to do right by them. Well, the wait is over on "Sherlock Holmes 3." Its officially coming in 2020, and will do battle against James Cameron's long-awaited "Avatar" sequel, as it is aiming for a Christmas release date. This made me laugh, since the first "Sherlock Holmes" and the first "Avatar" came out within each other in 2009.

We don't know if Guy Ritchie will direct and we don't know if RDJ himself or Jude Law are set to return. But the way the 2011 film ended, I needed some closure. There are some cool paths they can go down to tell this story, and I look forward to see what happens!