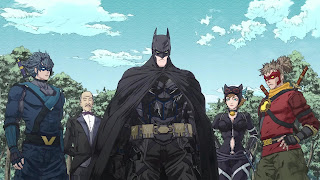 I've been saying for awhile now how awesome I think the DC animated movies are. I have loved just about every animated movie the studio has made. I like that now they have established themselves, that they are finally starting to take some risks. Earlier this year, I watched and reviewed "Batman: Gotham By Gaslight," Which put Bruce Wayne in Victorian era America. I know comic and DC fans know that this is based on a what if comic book, but not the general fan, so it was a big risk to make them believe in this world. DC is doing that once again with their beloved characters in "Batman Ninja."

Although this time it makes a little more sense. As the film begins Batman (voiced by Roger Craig Smith) going to stop a plot at Arkham Asylum by Gorilla Grodd, it seems he's got a machine that can alter reality, space and time and he wants to manipulate the villains for something. Batman is in the midst of stopping him when suddenly he, Grodd and the entire building of Arkham suddenly disappears. When Batman opens his eyes, he's suddenly found himself in Feudal Japan. And suddenly three samurai wearing smiley faces appear to try and kill them, and Batman subdues them with a great amount of ease.

Once he walks around a little, he learns that modern Gotham and Feudal Japan clashed together two years ago, and in that time The Joker has become an evil legend in the land. The Joker as always tries to kill Batman, so he must keep himself alive in his struggle against his greatest nemesis. Not only that, but Batman plans to find Gorilla Grodd (who if you don't know, is actually a big nemesis of The Flash) and find out why he did what he did, and what his true plan is. Batman isn't alone though, Nightwing, Jason Todd, Robin and Red Robin have been here, and they've allied with a group of Ninjas that have obsessed over a legend about a bat-vigilante. Batman has got an army at his disposal.

He'll need that army too. Because The Joker has got tons of tricks up his sleeve. Grodd has a host of allies; including Deathstroke, Poison Ivy, The Penguin and Two-Face. Oh, and how could I forget a sumo-style Bane? The bad guys are equipped with several Gundam Wing-style robots. Oh yes, the bad guys have giant robots in this movie, and they are quite awesome. Batman is determined to find a way back to his future.

The movie isn't special simply because its a clever way of exploring what Batman would do if he was suddenly transported to an older Japan. But the animation is better-than-usual in terms of anime. The animation in the movie looks as if a painting is coming to life. I was so absorbed by this that I found myself in many parts of the movie that being enthralled by the dreamy animation. The movie is beautifully complex.

Again, this is another example of DC Animation hitting a homerun out of the ballpark, but it also goes to show that they are willing to begin taking risks.

FINAL GRADE: A
Posted by Shawn Hoelscher at 8:59 PM