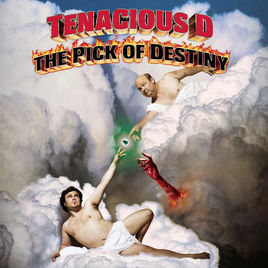 Well, here's some news that I didn't expect today.

This is a CD I have on my IPod, its a movie I found incredibly funny. I am talking about "Tenacious D: The Pick of Destiny." What's that, you ask? Well, Jack Black and his friend Kyle Gass are an alternative rock duo who write a bunch of comedic rock songs. They go by the name Tenacious D, and they have released a couple albums, and had their own movie made in 2007, the movie above, The Pick of Destiny! Both of these men are quite talented, and the way Jack Black plays guitar is quite shocking and rather remarkable. "Tenacious D: The Pick of Destiny" was one of those small gems that went nearly completely unnoticed in 2007, but when I actually watched it, I couldn't believe how much of it clicked with me.

Jack Black announced today that there will be a sequel to "The Pick of Destiny." It sounds like they are aiming for an October release of this year. Jack Black himself doesn't even seem to know how it will happen, but as assured that its going to happen. So that is good, right?

Posted by Shawn Hoelscher at 9:37 PM