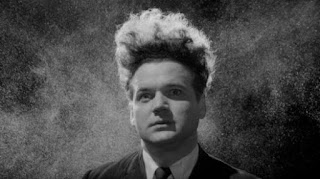 The image above is from a film called "Eraserhead." It is noted as being the first film by David Lynch, who would become every hardcore film geek's favorite surrealist. The movie is about, or at least I feel very strongly that its about, a man trying to overcome the anxiety of being a first-time father. I know this, because David Lynch has said this himself in interviews. Like many Lynch movies, you probably wouldn't get that right away watching the movie, even though I'd argue that "Eraserhead" is much easier to follow and much more linear in storytelling than many of his future endeavors. This film is significant to me because I am about to be a father.

I don't let my personal life get into my writings too often, but I think if you've read enough of my work, you know I a married and I think I have mentioned maybe once or twice in passing that I am going to be a father soon. Today I got word that soon is going to be sooner than expected. My wait on fatherhood is about to close. For the past nine months I have felt and dealt with the many nerves, the many anxieties and the many thoughts that I think Jack Nance's character grapples with in "Eraserhead." I am wildly excited to be a dad, but I am also scared out of my mind. It my first kid after all, and no matter what anybody says, you can't predict how anything will go because every child is different. Plus, for me personally, I am a worrier by nature. So spending nine months thinking about how good of a father I am going to be has been nerve-racking. But there is a huge level of excitement as well, something I am not sure Jack Nance's character ever felt.

I've been asked repeatedly if I am going to shut my blog down after my daughter is born. The answer is definitely no. I will warn that posts will come slower, and this summer is probably going to be a slow summer for me personally. I wouldn't have it any other way though. I want to be there for my child, that is important to me like you wouldn't believe. But when I can, I will check in, I will keep you posted on anything I've watched. Whether its new or old or whatever. I'll eventually get a groove back, but that will depend on baby. But the blog will not leave. I am not going to prison. I ain't dying, I am simply having a child. But I understand that newborn children take up lots of time, time I am willing to give to that child. I have some big plans for her, and I would love to eventually include her on this blog. But that's many years off right now, and it will heavily depend on whether she likes movies at all.

I do want to check in one day a week at least, and do a rundown on new trailers, news of the week, and if I've seen anything new lately. Like last night, I was planning on writing a review for "Gringo, "the movie that came out last March with Charlize Theron, Joel Edgerton, Sharlto Copley and David Oyelowo. But goodness, the movie was so embarrassingly disappointing that I didn't know what to say, and I fell asleep on the couch so that halted any writing I was going to do last night. But some quick reviews, and some quick thoughts on recent stuff is something I want to do in the upcoming weeks. Just depends on the time I am given, which won't be up to me. That's totally okay too though!

That will probably be one of the bigger things I will have to work on as a father. Not pushing my interest on my child. If she ends up not loving movies like I do, then I will not think about disowning her. That will be apart of who she is, and I will love every piece of her personality. But as a father, I want her to be able to follow her interests. My happiness will be secondary to hers, but if she happens to be a movie fan like daddy, then I will be happy to indulge that interest with her. And like I said above, I've got some ideas with her in mind IF she ends up loving movies like I do. But that all depends on her, and I am wildly curious to see what her interests will be. I have a feeling that she'll at least like movies, and I think some kind of media will engulf her somehow. I am a movie and comic book maniac and her mother is a TV and book lover, she's going to be into something, I am sure of it. I am curious to see what that will be.

All of this has got me thinking of Family Movies. And that doesn't mean Pixar or Dreamworks movies. But movies simply about families. I watched "Eraserhead" recently. I've been thinking of stuff like "Hanna" an adventure centered around a father and his daughter. I've definitely thought about "The Incredibles." I've reminisced the first time I saw things like "Homeward Bound" or "Free Willy" or the thousands of other things I grew up watching as a kid, and I wonder what her favorites will be growing. I am slightly dreading the day she sees Disney's "Frozen" because after working with children for five years, I know the popularity for that one hasn't weakened a bit. Joking of course, if she ends up loving it, then I will watch with her. Promise.

This is all my way of saying that I couldn't get anymore excited to be a Dad if I tried. I can't believe the wait is going to be over as soon as it is. Time sure seems to fly when you are heavily anticipating something. Hears to hoping everything goes well!
Posted by Shawn Hoelscher at 7:47 PM