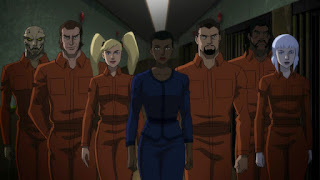 I've been saying it for years, whenever DC wants to hand the DCEU over to the people in charge of their animated movies, the world will be a better place.

In 2016, I was expecting "Suicide Squad" to be great. Even though I thought "Batman vs. Superman" was a letdown, I figured they couldn't screw "Suicide Squad" up. They got David Ayers to direct, and he was the king of gritty crime movies. For a concept involving a group of supervillains being forced by the government to go on covert missions or die, well, that's a concept that Ayers should have excelled in. There are about a thousand different excuses as to why "Suicide Squad" wasn't that great, but one of the big reasons is that Warner Brothers refused to give Ayers the leeway and freedom he needed to allow the movie to shine.

DC Animation made one Suicide Squad movie, but while it was super cool, it was mainly a Batman movie in disguise. With "Suicide Squad: Hell To Pay" the team is front and center. There are no special guests to guide us through the movie. Its all about the team. And while these bad guys have been assembled for the greater good. They are still bad guys, through and through. I think the Ayers movie went a little too out the way to make villains heroic, as if that could actually happen. The bad guys in this movie stay evil, even though they are forced to do good things, even though they are forced to work together. It was quite unexpected.

The movie follows Deadshot, Harley Quinn, Captain Boomerang, Killer Frost and newcomers Copperhead and Bronze Tiger. They are required to retrieve a male stripper named Steel Maxum, who apparently has something important that Amanda Waller wants. Which is also being pursued by some of DC's most powerful villains, including Professor Zoom and Vandal Savage. The team must get to Maxum before the other villains can. Everyone is selfish. Everyone is dangerous. Anyone can betray someone at any time, for any reason. It's a fairy suspenseful story, and the team gets the most fun out of it.

I feel like I am preaching to the choir at this point, but DC animation is where its at!
Posted by Shawn Hoelscher at 9:01 PM