Review: Joaquin Phoenix electrifies in "You Were Never Really Here"

You Were Never Really Here Review 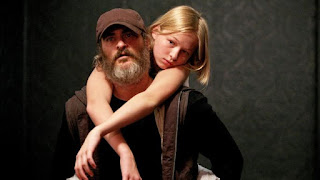 Joaquin Phoenix is, for a lack of a better word, a character.

He had a promising career when it began, showcased some real muscle as an actor. Then he announced he was going to retire. Then he announced he was going to pursue a career in rap music. Then after roughly a decade, that turned out be a hogwash. Then he released a mockumentary about what he was really doing during his time off. There were awkward interviews. There was an overgrown beard and overgrown hair. It was a remarkably weird time, and I thought he put such a foul taste in people's mouths that he'd never be able to bounce back. But he certainly has. Even if that "mockumentary" never ended up being a hit, he bounced back as if he never did any of that weird stuff he truly did.

"You Were Never Really Here" made a splash at the 70th Annual Cannes Film Festival, even though it was unfinished at the time. It still pulled a win for best director for Lynn Ramsey and best actor for Joaquin Phoenix. This year, its been slowly trickling out to theaters, slowly and slowly in this month alone. Now, everybody will be able to get a look at it. It's well worth checking out too, if I do say so myself.

The world is plentiful with crime movies. It seems like, as far as the crime genre goes, there are no more mysteries left. If you see "You Were Never Really Here," you will probably see lots of stuff you've seen before. There is a man who is haunted by his past. There is corruption within the police department. There are children who are being trafficked for sex. The haunted man goes on a one-man mission to save a particular girl who has a slight attachment too. I feel like this has happened in any group of crime movies you could name, or at the very least something like it. The thing that makes the biggest deal to me are how well its acted and how well the story plays out. There are going to be indulges in this formula for many years to come, so what exactly the filmmakers do with it is key. Director Lynn Ramsey has made something highly entertaining.

Joaquin Phoenix plays Joe. He is haunted by the cases he worked as an FBI agent. He is haunted by the time he spent serving our country overseas and now he works as practically a private eye for hire, but who beat the crap out of people. He is often hired by rich people to locate and rescue their children. The next big job he takes on is finding the daughter of a United States Senator. He successfully locates the girl, but she is swiftly taken away from him again. He learns that he's operating in a world where nothing is what it seems. He's determined to get the girl he originally rescued to safety and that is precisely what he does.

Joaquin Phoenix is really solid here. The cinematography is gritty and really sets the mood of the movie. There isn't much to it, but the actors give it some enough life for it to count. Check it out if you haven't.

FINAL GRADE: B
Posted by Shawn Hoelscher at 12:40 PM