"Won't You Be My Neighbor?" Trailer 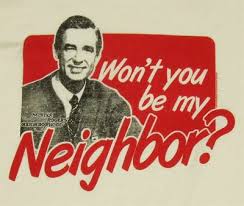 I grew up watching Mr. Rogers Neighborhood. I remember the puppets, the fun and colorful world that Mr. Rogers created and just how different it was compared to other children's shows. I watched Sesame Street and Barney and many other children's shows of the time. I always thought it was amazing that there were lots of shows for children that had to have make-believe creatures in the cast, just so the children in the audience knew that what they were watching was a children's show. While Mr. Rogers had his puppets and his make-believe world, its extraordinary what he pulled off when it was one-on-one with the children in the audience. That's what made him special.

I can hardly remember much from the show, so I was a little surprised by how this trailer affected me. There is a documentary coming out this summer about Mr. Rogers and how he was able to change the world, little by little, with his low-budget, low-tech television show for kids. It looks much better than I would have ever thought to give it credit for. The reviews out of Sundance, the annual film festival which this film premiered, have been outstandingly positive. It might do you good to keep an eye out for this one, whether you grew up with him or not.


Posted by Shawn Hoelscher at 8:29 PM