Wonder Woman 2 has found their Cheetah

I loved "Wonder Woman" and since its the shining light of the DCEU, a sequel to the smash hit was inevitable. We've heard some cool news over the last few months that could end making a good sequel. We know it will take place during the Cold War. Which is kind of interesting since we saw her in modern times in "Justice League." But okay, Cold War. Cool. We also know that Wonder Woman's arch nemesis will appear in the film. That's right, Wonder Woman is going head-to-head against Cheetah.

Who is Cheetah? She's basically a supervillain who was given cat-like powers by a plant god. Remember, this is the comic books after all, DC comic books to be exact. They origins of DC's heroes and villains were a little more wacky, I'd say. Cheetah has superhuman strength and speed as a well as a huge host of other abilities thanks to her Inherited Cat Abilities. She's also got a huge vendetta against Wonder Woman.

Cheetah has been cast for "Wonder Woman 2," and who they got isn't who I would expect. 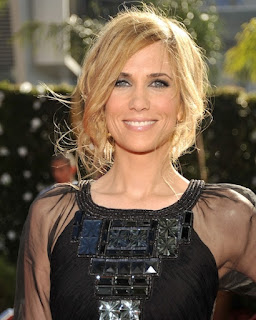 Man, I guess Warner Bros is trying REALLY hard to compete with Marvel.

I wouldn't peg Kristen Wiig as a superhero character, but hey a few years ago I wouldn't have pegged Chris Pratt or Paul Rudd as superhero cahracters but look how that turned out. Ten years ago, nobody could have fathomed that Heath Ledger could pull off somebody like The Joker, but he did and boy did he. But I don't think Kristen Wiig is anything close to Heath Ledger. You could actually see the promise of what was to come in Ledger's career prior to The Joker. What have we seen in Wiig's career that could possibly point to her being a compelling villain?

I guess we'll have to see. I am willing to shed some optimism since "Wonder Woman" is the best DCEU superhero movie so far.

Posted by Shawn Hoelscher at 9:26 PM