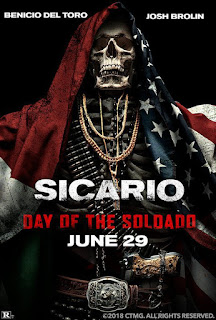 Over the weekend was my 29th birthday. It was a momentous occasion. I went to brunch with my parents and wife, saw a movie, got lots of cool stuff. Later in the evening, my in-laws came over for some ice cream and cake. They got me a movie trivia game for my birthday, and we spent part of the evening playing the game. Of course, yours truly killed it!

There was a question that came up regarding "Sicario," a movie from 2015 that I ended up loving more than I thought it would. While the film didn't make my top ten of that year, it was certainly in the running. I dug out the movie on Amazon Prime and closed my birthday watching it with my wife. It's still a brutally brilliant drug thriller that was much better than it had any business being. That's extra impressive since the film is quite a dark piece of thriller movie-making. I never would have ever guessed we'd be getting a sequel to the movie.

Hollywood, take notes, this is how franchise filmmaking should be working. We should be more sequels to movies like this instead of taking something like "50 Shades of Grey" and turning that into a franchise.

So no Emily Blunt this time, seemingly. But Josh Brolin and Benicio del Toro return for another go, it looks like we are going to get some more stark drama from over the boarder.


Posted by Shawn Hoelscher at 8:48 PM